In this study, we successfully developed an electrochemical cathodic catalyst with a previously unreported structure. In essence, a new material was fabricated by doping EDTA-Co with P. EDTA has six ligand sites and forms an octahedral structure through six coordination bonds with transition metals. In addition, by doping hetero atoms, the atomic and spin charge density of the catalyst surface are changed to lower the adsorption energy of oxygen, which leads to more favorable reactions and enhances the catalytic properties. Co and P were added to EDTA to synthesize a successful catalyst, and testing confirmed an increase in electrochemical performance due to the addition of Co and P. Moreover, this work demonstrates that the synergy effect exceeds that of simply adding Co and P.

A new material (as EDTA-Co with P) was fabricated by coordination bonding with Co and by doping N. Cobalt and EDTA undergo six coordination bonds. In addition, the oxygen chemical adsorption energy of the catalyst surface was changed when N doping, and in each case, an electrochemical synergy occurred, and when the two cases were mixed, excellent electrochemical characteristics were shown. 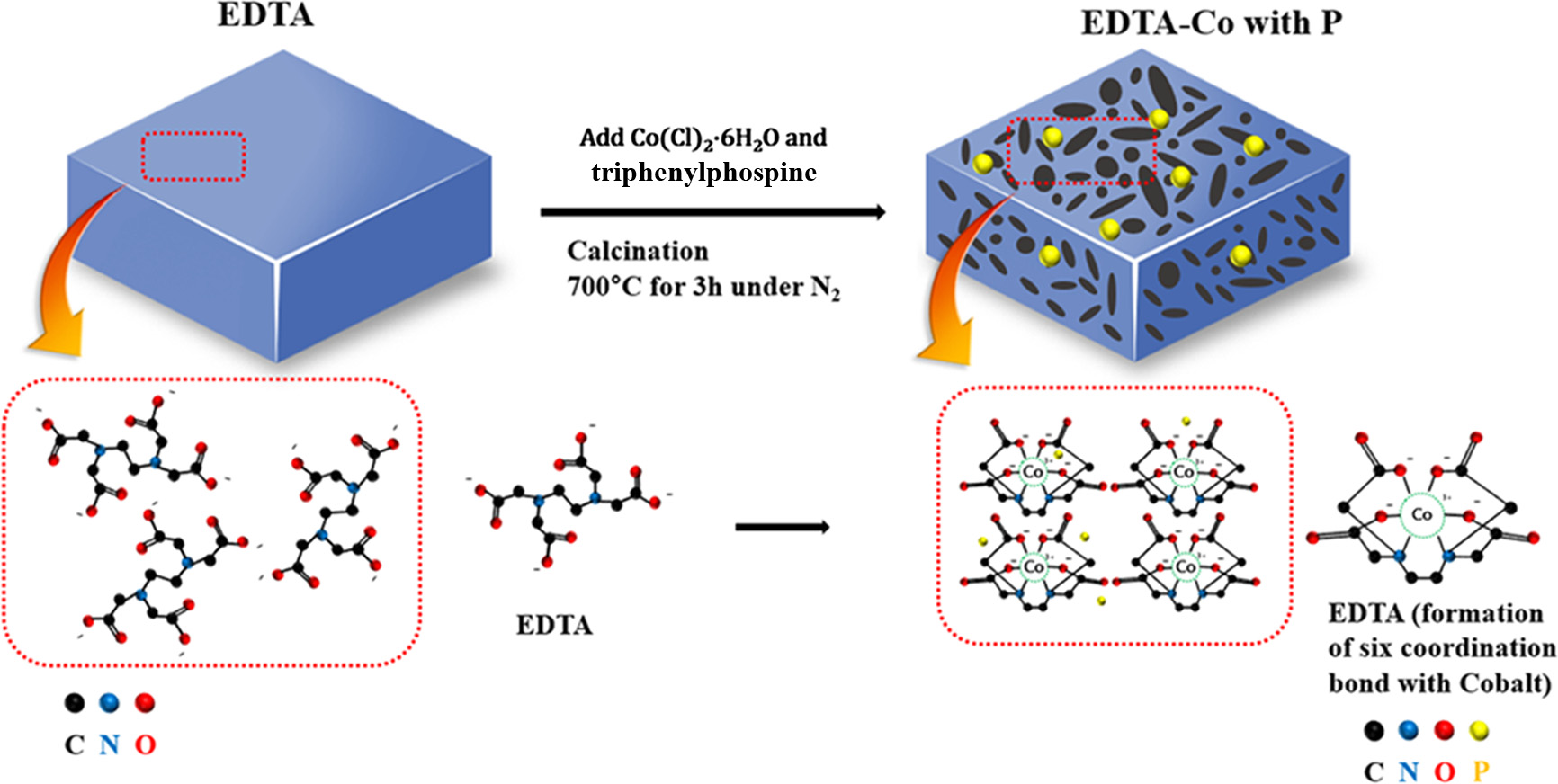 Due to the continuously increasing energy consumption and depletion of environmentally harmful fossil fuels, the development of eco-friendly and renewable energy is attracting significant attention from the scientific research community.1 Among the various energy storage media options, metal-air batteries have high energy storage density and theoretically have an air electrode serving as the cathode electrode, which allows an infinite supply of resources. In addition, metal-air batteries have the advantage of being very similar in structure and function to the widely used Li-ion battery, which eliminates any large changes in energy storage industrial processing.2-4
The electrochemical performance of a metal-air battery is determined by its reactivity with oxygen in the air electrode’s cathode. The more oxygen that is adsorbed and desorbed on the electrode’s surface, the more electric charge that gets generated, and the higher the energy storage density. Therefore, in order to obtain a metal-air battery with high energy storage density, the cathode electrode’s oxygen reactivity must be elevated.5,6 However, this poses a challenge, as the cathode has a very low reactivity with oxygen, and thus requires a catalyst material to increase the reactivity. Various studies have been conducted to determine the optimal electrochemical catalyst required at the cathode. Several studies have shown Pt/C to be the best performing catalyst.7 However, on account of Pt/C has resource scarcity and high cost, carbon-based materials have been studied as alternatives, due to their low cost and specialized properties. However, the catalyst composed only of carbon has low reactivity with oxygen and is low in efficiency as an electrochemical catalyst. In order to overcome this, doping with hetero atom (B, N, S, P) improves performance.8,9 Moreover, synergistic effects are produced through bonding with metals.10
Many previous studies have conducted material-based experiments that consist only of carbon such as carbon nanotube (CNT) and graphene. In this study, however, ethylenediaminetetraacetic acid (EDTA) was selected as the carbon-based catalyst material. EDTA contains two amine-like structures that contain N. This has the advantage of having pyridinic N, pyrrolic N, graphitic N and oxidized N structures of N-doped material even without N doping. EDTA has six ligand functional groups; when it encounters transition metals, it undergoes coordination bonding to form octahedral structures.11,12 Throughout this process, the EDTA maintains a porous texture and high surface area, which is highly advantageous for an electrochemical catalyst. The electrolyte and air move between the pores and the coexistence of all three-phases (gas-liquid-solid) increases oxygen reactivity and provides a smooth passage for charge transfer.13,14 In this work, we report the development of a novel electrochemical catalyst through the combination of EDTA and cobalt (Co), a member of the transition metal family. Furthermore, the addition of P generates supplemental synergistic effects that demonstrates the efficacy of our EDTA-Co and P catalyst15— a solution, that to the best of our knowledge, has yet to be proposed.

Synthesis of EDTA-Co Bond Precursor. All reagents were used without further purification. 1.6 g of EDTA (≥ 99%, Sigma-Aldrich) was added to 20 mL of DI water and stirred for 2 h. Next, the solution was ultrasonicated and dispersed for 4 h (VCX-750, Ultrasonic Processor) using a 750 W output. 0.3 g of Co(Cl)2·6H2O (97%, Deajung Chemical Co., Korea) was added to the dispersed EDTA solution to induce bonding between the EDTA and Co constituents. Finally, the solution was stirred for 20 min and allowed to stand for 2 h until bonding completed. The EDTA-Co bonded precursor was obtained after washing and filtering with DI water.
Synthesis of Porous Electrocatalytic Samples. 1.6 g of EDTA or EDTA-Co, 0.8 g of triphenylphospine (≥95%, Sigma-Aldrich) 0.8 g of potassium hydroxide (85%, Sigma-Aldrich), and 0.8 g of melamine (99%, Deajung Chemical Co., Korea) were mixed in a mortar until it transformed into a semi-solid state with an adhesive-like viscosity. The resulting mixture was transferred to an alumina boat and calcined at a heating rate of 10 oC/min to 750 oC for 2 h under N2 flow. After the sample cooled, it was refluxed in 200 mL of 0.1 M sulfuric acid (H2SO4, 0.1 N Standard Solution, Alfa-Aesar) at 80 oC for 12 h to remove impurities. Afterwards, the products were washed with DI water and ethanol, filtered, and dried overnight in a 70 oC oven. Using this experimental method, the product samples’ EDTA-Co bond were determined depending on the initial EDTA and EDTA-Co material selection, and the P doping can be controlled depending on the presence or absence of triphenylphospine.
Sample Characterization Methods. The sample materials’morphology and porous structure was determined by field-emission scanning electron microscopy (FE-SEM, SIGMA, Carl Zeiss) and field-emission transmission electron microscopy (FE-TEM, JEM-F200) with an energy dispersive spectroscopy (EDS) detector. The crystal structures’EDTA-Co bonds were characterized via X-ray diffraction (XRD, Bruker-AXS) with a 2θ = 20o to 80o diffraction range. The diffractometer operated at 40 kV and was equipped with a Cu Kα radiation source. 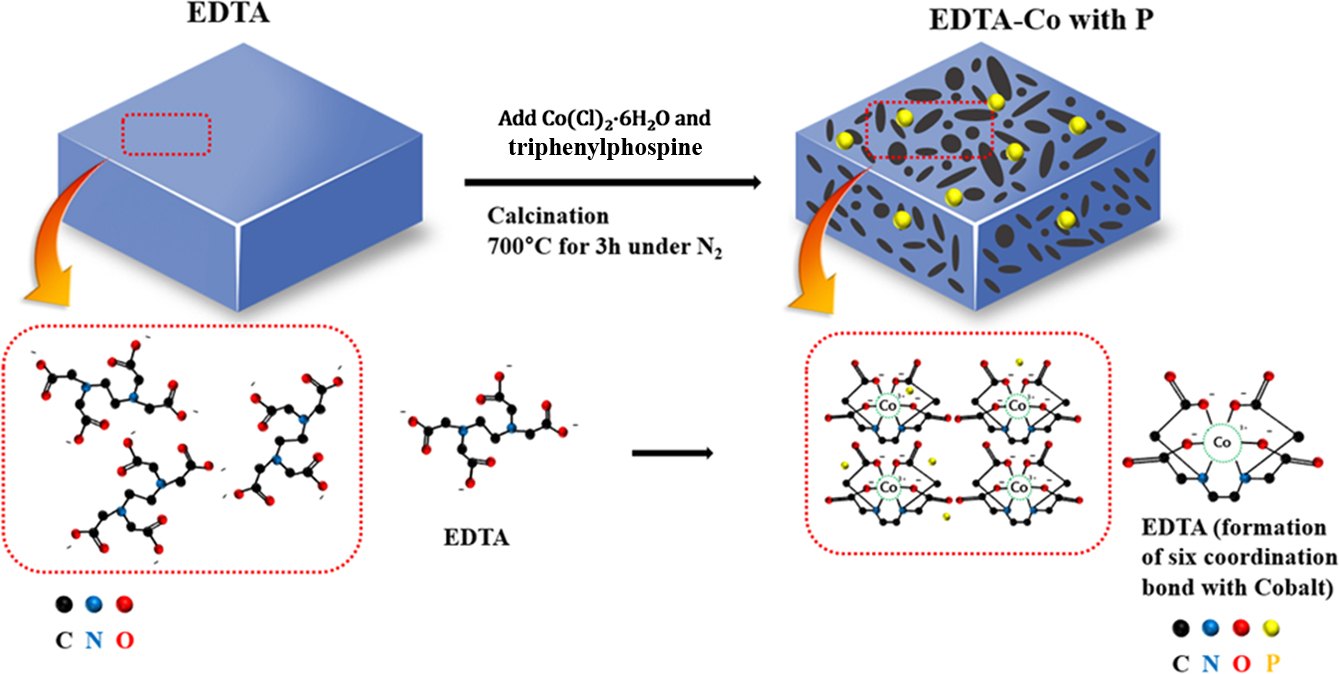 Electrochemical Property Measurements. Measurements of the electrocatalytic (Produced y the method shown in Schem 1) bifunctional properties (Oxygen Reduction Reaction - ORR & Oxygen Evolution Reaction - OER) and three-electrode mechanism system were carried out with a potentiostat (CH Instruments 600E, USA) and a rotating-disk electrode (RDE). Platinum wire (counter electrode), Ag/AgCl electrode (reference electrode), and a glassy carbon electrode (GCE, diameter: 5.0 mm, working electrode) were used for taking measurements. Prior to the measurements, the GCE surface was cleaned on the polishing pad with 1 μm of polishing diamond and 0.05 μm of polishing alumina; then rinsed with DI water. Next, a catalytic ink (1000 μL mixture) was fabricated by adding 4.0 mg of powdered sample to 5% Nafion solution, isopropanol, and DI water in a solution volume ratio = 1:3:6. After sonication for 1 h, 7 μL of ink was dropped onto the GCE surface and allowed to dry for 40 min at 40 oC. 0.1 M KOH electrolyte was purged with oxygen and nitrogen for 1 h and then the bifunctional test was performed. The bifunctional properties of electrocatalytic activity were evaluated by linear sweep voltammetry (LSV) and cyclic voltammetry (CV) at 10 mV/s of scan rate in a voltage range from 0.2 to -1.0 V (ORR with O2 sat) and 0.2 to 1.0 V (OER with N2 sat) with rotation speeds from 1600 rpm. 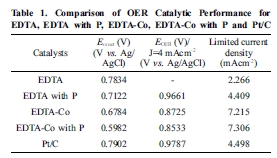 In this work, we successfully demonstrated the synergistic effect of coupling between P, Co and EDTA. The six ligand sites of EDTA bind to the transition metal with coordinate bonding and form an octahedral structure. In addition, the P particle is located between Co and EDTA bond, triggering atomic and spin charge density changes that result in charge redistribution on the catalyst’s surface. This process changes the chemical adsorption energy of O2, and therefore affects the material much more so than simple Co and P doping. P-doped EDTA and Co structures were verified by FE-SEM and FE-TEM and further confirmed by XRD analysis. The location of EDTA-Co with P of electrochemical properties was measured by chronoamperometry and potentiostat methods. CV and LSV curves confirmed that P and Co samples had a synergistic effect on the electrochemical.