As the problem of plastic based material waste is increasing, carbon fiber reinforced plastics (CFRPs) need to achieve closed life cycle. This study aims to investigate the potential for recycled carbon fiber reinforced plastics (rCFRPs) with polypropylene (PP). To improve mechanical properties of rCFRP, maleic anhydride grafted polypropylene (MAPP) was used as a coupling agent due to absence of functional group in PP. The rCFRPs were prepared by compression molding after stacking of recycled carbon fiber (rCF) wet-laid nonwovens and matrix films. The sufficient oxygen functional groups observed on rCF surface and they contributed to improve mechanical properties by covalent bond between maleic anhydride (MA) group and rCF surface. The tensile properties of the rCFRP with 2 wt% MAPP were dramatically increased compared to that without MAPP. However, the effect of MAPP content until 5 wt% on the tensile properties was slight.

MAPP induced a dramatic increase of the tensile strength of rCFRP with only 2 wt% addition because rCF has sufficient oxygen functional groups. However, the effect of MAPP content until 5 wt% on the tensile properties was slight. It is suggested that this is due to excessive MAPP molecule concentration on rCF surface. 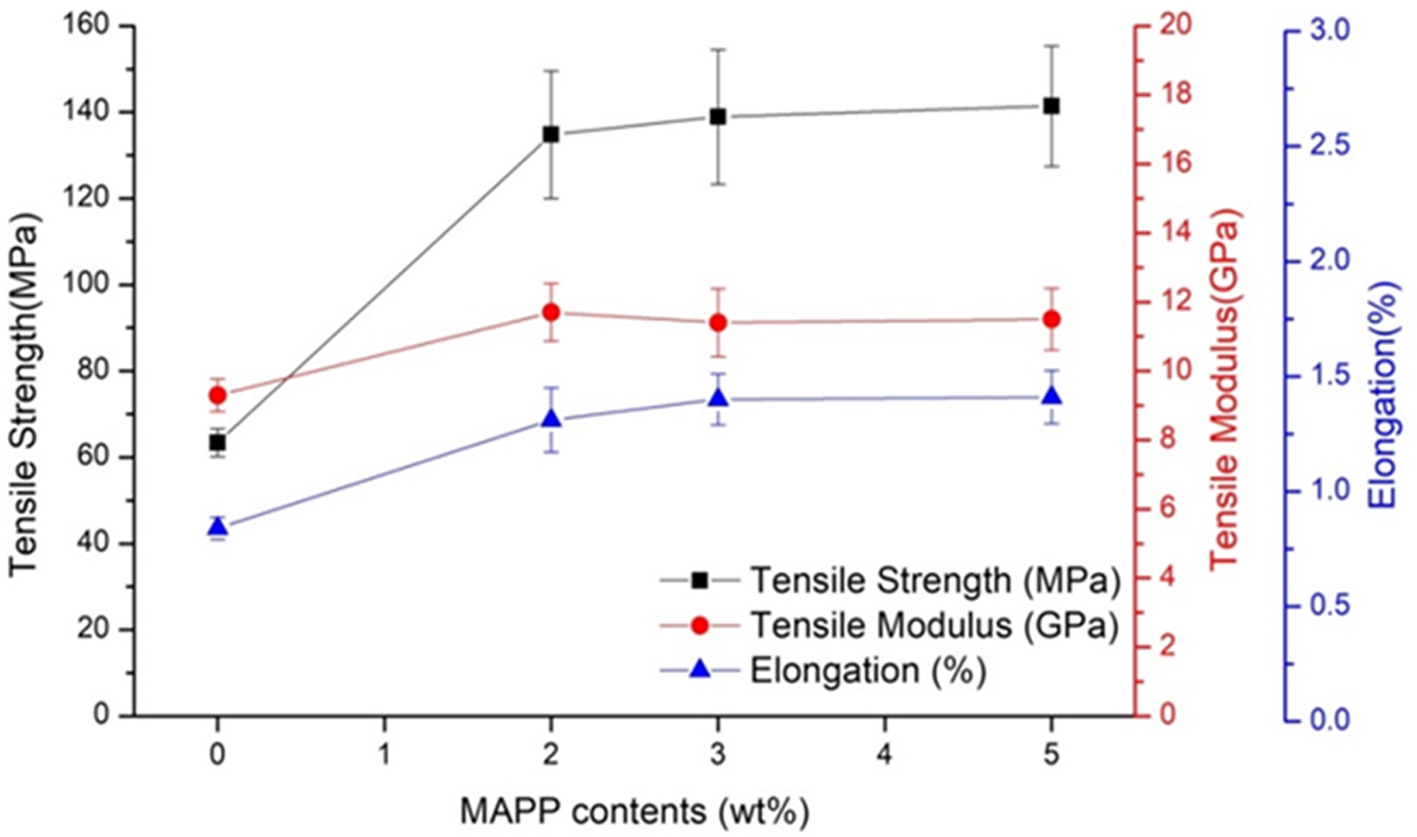 This work was supported by 2019 INHA UNIVERSITY Research Grant.

Carbon fiber reinforced plastics (CFRPs) can be considered as a strongest potential material to replace not only conventional single polymers but also metallic materials, because carbon fiber (CF) has excellent mechanical, thermal and electrical properties. Although the cost of CF still is high to use many applications,1 the high value-added industries such as aerospace and automotive are promising markets for CFRPs. CFRPs have a fuel-efficient benefit in vehicles because they are lighter than metallic materials. Moreover the use of CFRPs will be facilitated by the regulations for CO2 emission reduction that will be strengthened in the future.2
However, the use of CFRP is not always expected to have a positive impact on the environment. Recently, plastic waste becomes a new global problem and concerns about CFRPs waste are also growing. Hence, the demands of recycling CFRPs are inevitable, but CFRPs are difficult to recycle due to its complex composition.3-6 Especially, CFRPs that used the thermoset resins as a matrix are more difficult to recycle in contrast to the case of thermoplastic due to their cross-linked molecular structure.
Several attempts to recycle CFRPs have led to the development of various recycling processes.3-6 The rCF can be obtained with little degradation of mechanical properties compared to virgin CF (vCF). But, except in special cases, most rCFs are reclaimed into short fibers and the diversity of CFRPs waste means that rCF should not be aimed at competing with vCF. The goal of recycled CFRPs (rCFRPs) is to complete the closed life-cycle for CFRPs. Because thermoplastics are easy to reuse and recycle, the matrix more suitable for rCFRP is the thermoplastics rather than thermoset for achieving the goal.
Polypropylene (PP) is a popular commodity thermoplastic for various industrial applications. As a matrix for rCFRP, PP has the advantages that are low cost, easy processing and low weight etc. However, there is concern that PP does not contain a functional group to use as a matrix for rCFRP in which the interfacial adhesion between the recycled CF (rCF) and matrix is an important factor. For improvement interfacial adhesion between fiber and matrix, there are two methods investigated by several studies. First method is a treatment on fiber surface to add functional group.7,8 The second method is to add a material which contains functional groups to the matrix.9,10 Physical or chemical surface treatments have been reported to be sufficiently efficient, but there is an issue about the degradation of mechanical properties of rCF.7,8 Therefore, the latter is considered more suitable for use with rCFRP. Maleic anhydride grafted polypropylene (MAPP) is a coupling agent with maleic anhydride (MA) groups including oxygen functional groups. For various reinforcements such as flax and glass fiber, using MAPP as a coupling agent were proved to improve the mechanical properties of the fiber reinforced PP because the interfacial adhesion increased.11-16
In this study, we prepared the rCFRPs with PP and investigated the effects of MAPP content used as coupling agent. The rCF wet-laid nonwovens were incorporated as reinforcements into matrix films by compression molding. In consideration of the impregnation, PP with high melt flow index was selected as the matrix. The compatablized PP pellets were compounded with MAPP coupling agent by single-screw extruder.

Materials. The rCF used in this study is purchased from ELG Carbon Fibre Co., Ltd. (U.K.). The fiber length was random distributed and the fiber diameter of rCF was 7.5-8 μm. It was recycled from CFRPs waste through pyrolysis process. Carboxymethyl cellulose sodium salt (CMC-Na) is used as a dispersion agent and it is purchased from Samchun pure chemical Co., Ltd. (Korea). PP (SJ-170) was supplied by Lotte Chemical Co., Ltd. (Korea). The melt flow index of PP at 230 ℃ is 25 g/10 min and tensile yield strength is 34 MPa according to manufacturer. MAPP (G3003) purchased from Eastman Co., Ltd. (U.K.). The PP was compounded with 2, 3 and 5 wt% of MAPP by single screw extruder.
Preparation of the rCF Wet-laid Nonwovens. For removing very short fibers and dust, the rCFs were washed three times using distilled water in sieve and dried for 24 h at 80 ℃. The 4.4 g of rCF was dispersed in the CMC-Na solution that was prepared by sufficiently dissolving the designed weight of CMC-Na in 2 L of distilled water. After dispersion for 10 min at 2700 rpm, the rCF slurry was poured into a square sheet former (25×25 cm2) filled with 18 L of water. After dispersing for 5 sec with air bubbles, the water was drained to lay the rCF nonwovens. The rCF nonwovens were dried in an oven at 80 ℃ for 12 h. This process was similar to papermaking (Figure 1) and used the standard disintegrator and square handsheet former according to TAPPI-205.
Manufacturing the rCFRPs. For compression molding, the PP and PP/MAPP pellets were processed into a film. Two layers of the rCF nonwovens and matrix films were cut into squares 18×18 cm2 respectively and then they were stacked in the closed mold for compression molding as shown Figure 1. The contact pressure was 1 MPa and heat up to 200 ℃ during 50 min. After pre-heating, the pressure was increased at 10 MPa. After 10 min, the temperature was decreased to room temperature by water cooling system. In the rCFRPs, the fiber volume fraction was about 20%.
Characterization. The morphologies of samples were examined by using scanning electron microscope (SEM, S-3400, Hitachi Co., Ltd., Japan). Before SEM analysis, all the samples were coated with a thin layer of platinum by sputtering for 2 min. SEM with a tungsten filament operated in high vacuum mode at 15 kV. Thermal behaviors of the rCFRPs were observed by using differential scanning calorimetry (DSC, Q20, TA instrument Co., Ltd., USA). Specimens were put into aluminum pans. Under nitrogen atmosphere, the melting temperature (Tm), crystalline temperature (Tc) were measured in the temperature 40 to 200 ℃ at 10 ℃/min of the heat and cooling rate. All the samples were held at 200 ℃ for 5 min to eliminate thermal history. X-ray photoelectron spectroscopy (XPS, K-alpha, Thermo Fisher Scientific. Inc., USA) was used to investigate the surface chemistry of rCFs. Avantage and XPSPEAK 4.1 software were used to process the spectra. Shirley type background and Gaussian/Lorentzian product functions are applied for C1s high resolution spectra curve fitting. The tensile properties of the rCFRPs were evaluated according to ASTM D 638 ‘Standard Test Method for Tensile Properties of Plastics’ by tensile test using universal test machine (UTM, Instron 3343, Illinois Tool Works Inc., USA). The specimens were cut in the same direction and the cut surface of them was gently sanded with sandpaper. At least 20 specimens of rCFRPs were tested due to large scattered tensile properties and all specimens were tested at crosshead speed of 2 mm/min. Since the specimens were thick (~400 μm), the results of tensile test are only valid for comparison among the samples evaluated.

The rCFs and the rCF nonwovens incorporated into PP by compression molding have been investigated. Furthermore, in order to improve the tensile properties, the effect of MAPP on the composite has been also investigated. The rCF is consisting of two types: fluffy and bundled rCF. Both types have sufficient oxygen functional groups on fiber surfaces and MA group in MAPP could react for covalent bond to fiber surface. The 2 wt% addition of MAPP resulted in dramatic improvement of tensile properties, but the effect of the MAPP content was small. The slight effect has been considered to be associated with excessive molecular chain density on the rCF surface. In the rCFRP with 5 wt% addition of MAPP, the excessive molecular chain density is implied by the shoulder peak in DSC analysis and by the craze-like features in fracture morphology. Finally, it is seen that the shoulder peak is due to the excessive chain density through DSC analysis result.