The disentanglement of multi-walled carbon nanotube (MWNT) bundles by using a sticky sugar syrup was explored for the first time. The syrup was prepared by mixing sucrose, glucose, fructose, and distilled water in a 1:1:1:0.8 weight ratio. A disk-type mixer suitable for high-viscosity materials was built to mix this syrup with MWNTs. To find out the optimum mixing conditions for effective disentanglement of MWNTs, the content ratio of MWNTs to sugar syrup was varied at each mixing step. Digital image processing technique was used with optical micrographs to quantitatively estimate the dispersion of nanotubes in sugar syrups. This revealed that the most homogeneous dispersion of MWNTs in the sugar syrup was achieved by gradually adding the syrup at each mixing step rather than all at once at the initial mixing step. The dynamic viscosity (η') of the mixtures was measured to evaluate the overall dispersion state of MWNTs. The incorporation of MWNTs increased the η' of sugar syrup, exhibiting a decreased η' with an increase in the degree of dispersion. To validate this novel dispersion method for polymer composites, disentangled MWNTs were transferred into poly(vinyl alcohol) (PVA) and polyacrylonitrile (PAN); they exhibited uniform dispersion in each polymer matrix, without reagglomeration occurred.

Sticky sugar syrup with crystal-inhibiting characteristics was used to disentangle MWNT bundles. The ratio of black area to the entire area in the optical micrographs was calculated to quantitively estimate the dispersion degree of nanotubes. The effective disentanglement of MWNTs in the sugar syrup was achieved by gradually adding the syrup at each mixing step. 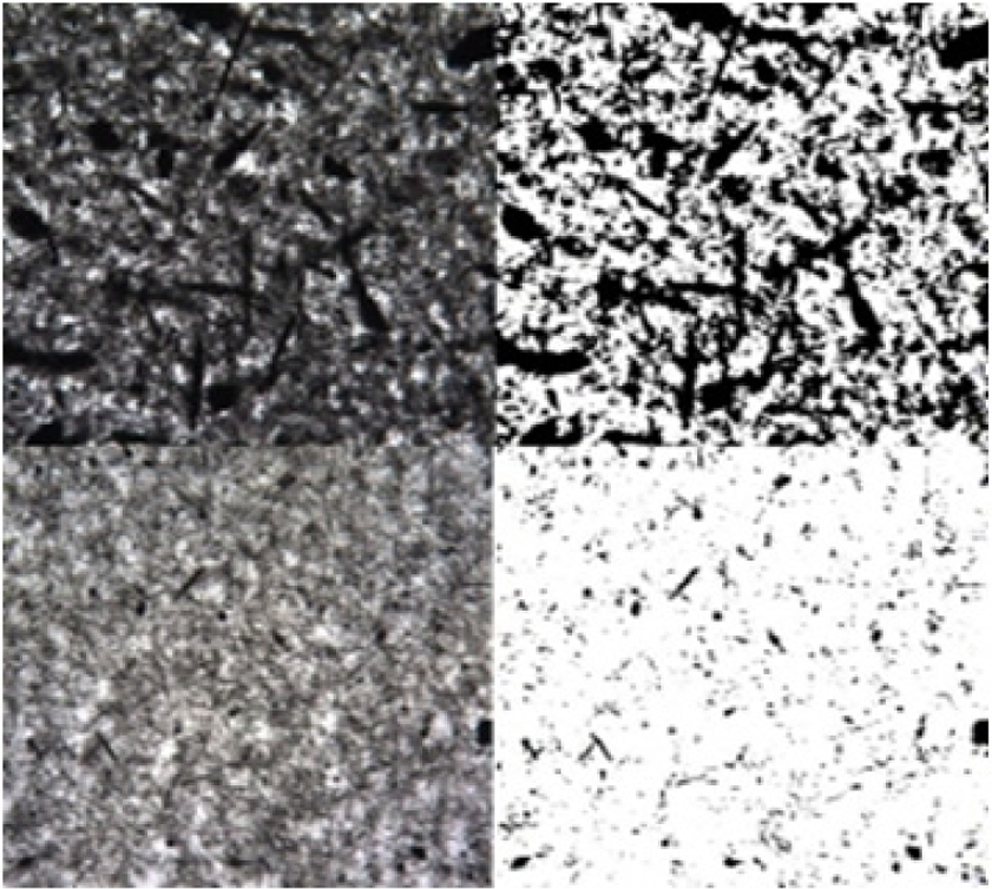 This research was supported by Basic Science Research Program through the National Research Foundation of Korea (NRF) funded by the Ministry of Education (NRF-2017R1D1A1B03035939).

Carbon nanotubes (CNTs) have a fiber-like structure with diameters in the nanometer scale and lengths up to tens of microns. Due to their various benefits such as exceptional mechanical, electrical, magnetic, and thermal properties,1-6 many researches have been devoted to exploring their potential applications in a large scale. Currently advances in the catalytic process have allowed the production of multi-walled carbon nanotubes (MWNTs) at the commercial scale. However, most of the manufacturing processes result in highly entangled and aggregated structures.7 CNTs tend to cluster together due to the strong van der Waals attraction between them, so it is extremely difficult to homogeneously disperse them in various media. This can prevent the achievement of their superior properties in applications such as reinforcement materials and membranes. Therefore, the homogeneous dispersion of CNTs in the desired medium is a prerequisite for their practical applicability. Previous dispersion works on CNTs in continuous phase were focused on the chemical modification of the nanotube surface by strong acids, gas plasma or functionalization, polymer dispersants, surfactant-assisted processing, etc.8-14 In addition, most of the dispersion methods operate through chemical treatments and strong, long-lasting sonication. These generate defects on the nanotube walls and makes the nanotubes short with open ends, which might worsen the electrical and mechanical properties.15
The full and easy dispersion method of CNTs with a little energy input and in a large scale is favored in the industrial field. Furthermore, noncovalent approaches appear more attractive than the covalent ones since they maximize the preservation of the intrinsic properties of CNTs.16 However, it does not seem that there is a simple way to obtain fully disentangle nanotubes with a little limit to their further applications. Thus, the present study proposes a novel method to conveniently disentangle nanotubes in their manufactured state without addition of chemicals nor functionalization of the nanotube surface. Further, fully dispersed nanotube suspensions were applied to the fabrication of CNT-reinforced polymer composites. MWNTs were mixed with a sticky sugar syrup, which was used as the dispersing medium to disentangle them prior to resuspending them in the desired solvents. To discover the effective mixing conditions to disentangle the MWNTs three different mixing ways were tested by varying the ratio of sugar syrup to MWNTs in each mixing step. The versatility of this method was clearly demonstrated by transferring disentangled MWNTs into polyacrylonitrile (PAN) and poly(vinyl alcohol) (PVA) matrices, soluble in dimethylformamide (DMF) and water with very different degrees of affinity toward nanotubes, respectively.

Materials. MWNTs (average diameter = 40–50 nm and length = ~500 μm) produced via a chemical vapor deposition (CVD) method were used for the experiments. As a dispersing medium, viscous sugar syrup was prepared by mixing sucrose, glucose, fructose, and distilled water in a 1:1:1:0.8 weight ratio. PVA (degree of hydrolysis = 99.5%, degree of polymerization = 1700) and PAN (molecular weight = 150000 g/mol) were purchased from DuPont and Sigma-Aldrich, respectively.
Disentanglement of MWNTs in Sugar Syrup. A disk-type mixer was designed to give high shear to viscous material. The gap distance between the mixing plates was fixed to 0.2 mm and one of them, having a diameter of 65 mm, was rotated at 20 rpm. The disentanglement of the MWNTs occurs by passing the mixture through between these two plates.
Dispersion of MWNTs in PAN and PVA. The sugar syrup was removed by washing with distilled water and the filtered MWNTs in a wet state were rinsed with DMF and water, (i.e., the solvents for PAN and PVA, respectively) prior to suspending them in each solvent. The so-obtained suspensions were gently sonicated for 30 min in the sonic bath, followed by the dissolution of PAN and PVA at 80 oC. The resulting PAN and PVA concentrations were 15 and 12 wt%, respectively. The spinnable PAN/MWNTs solutions were extruded into a coagulant bath containing distilled water at room temperature through a syringe needle (diameter = 0.65 mm). The PVA/MWNTs solutions were cast on glass plates at room temperature.
Measurement of the Physical Properties. After the mixing process of MWNTs with sugar syrup was completed, aliquots of the samples were collected to evaluate the dispersion status by using a optical microscope (Olympus BH-2) at 400 times magnification.
The viscosity of the MWNT/sugar syrup mixtures was measured at 30 oC in dynamic mode through an advanced rheometric expansion system (ARES; Rheometric Scienctific Inc.). Parallel plate geometry in a diameter of 25 mm was employed, with a plate gap and a strain level of 1 mm and 5%, respectively.
The fractured surfaces of the prepared composites in liquid nitrogen were observed via field emission scanning electron microscopy (FESEM; Philips JSM6330F) to examine the quality of nanotube dispersion in the polymer matrices.

To the best of our knowledge, we explored for the first time the disentanglement of MWNTs by mixing with sugar syrup without chemical modification or additive incorporation, which is not expected to change their inherent properties. Sticky sugar syrup with crystal-inhibiting characteristics was used, allowing the disentanglement of the nanotubes. The disentanglement states of MWNTs in the medium affected by the type of mixing process are quantitatively evaluated by digital image processing. The key factor to effectively mix the nanotubes with this viscous medium is its divisional addition in a sense of viscosity matching method. At the initial mixing stage, the MWNTs should be debundled to some degree suitable for being further individualized by successive syrup addition at the next stage. Thus, we concluded that the initial mixing condition is crucial in determining the final dispersion state. Then, both PAN and PVA composites with uniformly dispersed nanotubes were successfully prepared, demonstrating that the disentangled state of the MWNTs resulting from the sugar syrup treatment was retained even in the successive fabrication processes. This versatile and environmentally benign method presents a little limitation in the preparation of polymer/CNTs composites. In addition, CNT-matrix related applications such as CNT fibers and membranes could be easily accessed through the preparation of stable and dispersed CNT suspensions.