A new thiophene benzimidazole based polymer (TBIP) was synthesized and then the TBIP-Br, TBIP-BF4 and TBIP-ClO4 polymer salts were obtained in water. All polymer salts can be dissolved in environmentally friendly solvents such as water or ethanol. Electrochemical and optical properties of the polymers were elucidated with cyclic voltammetry (CV) and ultraviolet-visible absorption (UV-Vis) spectroscopy. By using CV, the highest occupied molecular orbital (HOMO) values were found as approximately 1.70 eV. According to the atomic force microscopy (AFM) images of the thin film of TBIP, there are homogeneously distributed and smaller particles on the film surface, while the surface of TBIP-Br and TBIP-ClO4 thin films is rougher due to -Br and -ClO4 counter ions being bigger than -BF4. Additionally, the antimicrobial activity of TBIP polymers was also investigated. All TBIP and its salts were showed antimicrobial activity against S. aureus ATCC 6538 and no antimicrobial activity against E. coli ATCC 1301 and ATCC 25922.

Thiophene benzimidazole-based polymer (TBIP) polymer containing benzimidazole and thiophene units was synthesized for the first time and its salts (-ClO4, -BF4 and -Br) that can be dissolved in environmentally friendly solvents were obtained. The structures of this polymer and its salts were characterized and their surface morphologies were investigated. At the same time, the antimicrobial properties of the polymers were examined. 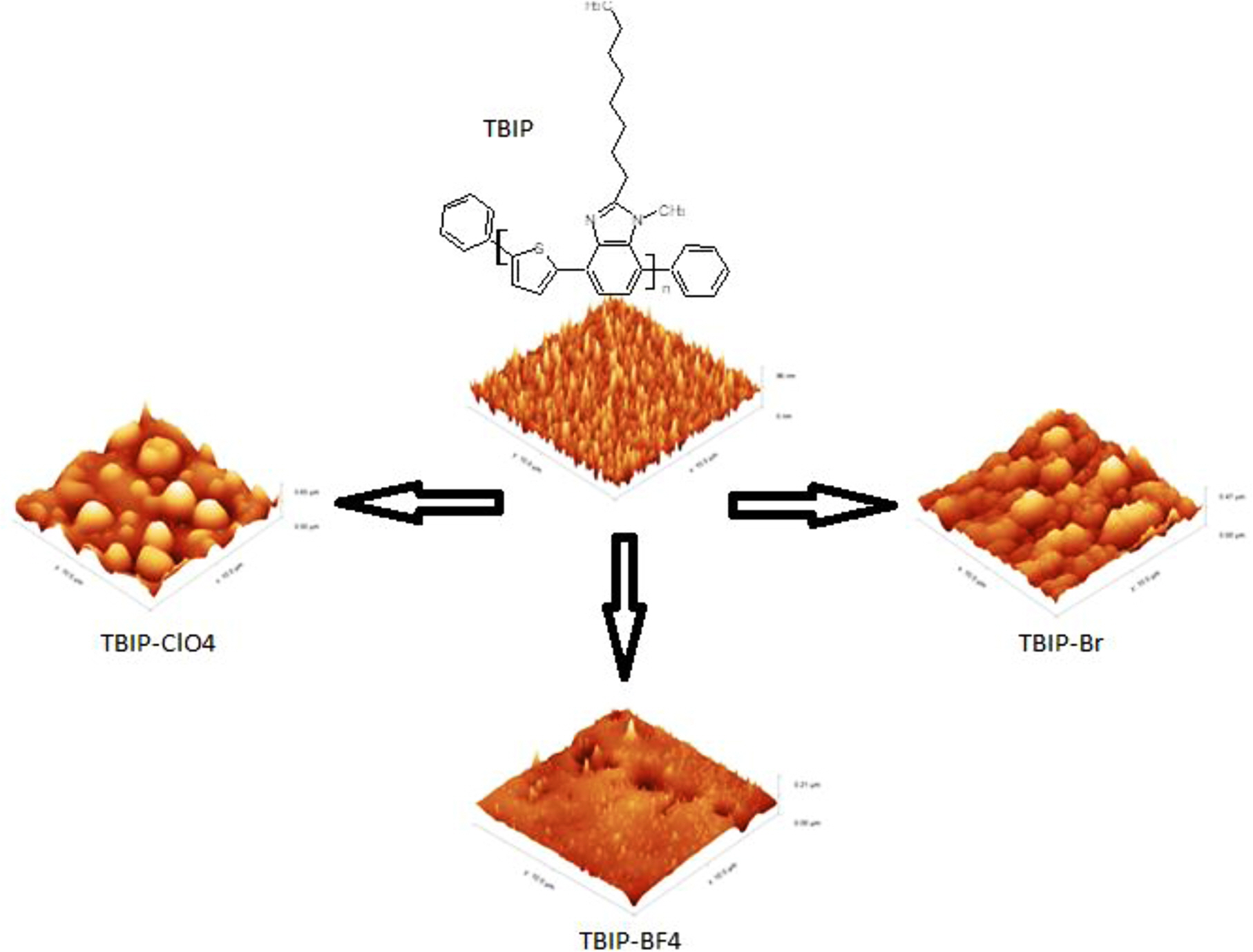 Information is available regarding the synthesized TBIP polymer and its salts’ structural characterization. The materials are available via the Internet at http://journal.polymer-korea.or.kr.

Benzimidazole, a heteroaromatic compound, is formed by the fusion of benzene and imidazole rings and shows weak basic properties. Therefore it usually dissolves in dilute acids. The pK value of benzimidazole is known as pKa1=5.30 and pKa2=12.3.1 Benzimidazole compounds generally show acidic properties in aqueous basic solutions. The fact that benzimidazoles have acidic properties, such as imidazoles, is due to the stabilization of the ion by resonance.2 Benzimidazole compounds (i.e. imide nitrogen) containing a hydrogen atom in the 1-position are generally readily soluble in hot water as they are soluble in polar solvents. However, it does not dissolve in benzene and ligroin, which are apolar solvents. Therefore, the solubility in non-polar solvents is increased by adding non-polar substituents at various locations of the benzimidazole core.3
When polar substituents are added to the benzimidazole core, the solubility in polar solvents is increased; for example, 2-aminobenzimidazole is soluble in water.4 In addition, due to the high stability of the benzimidazole ring, oxidation separates the benzene ring of benzimidazole only under strong conditions. The benzimidazole ring is highly resistant to the reduction so it cannot be reduced except for a small number of catalytic reduction methods. The benzimidazole compounds mainly react via 1 and 3-position nitrogens. In addition, they can form salt by interacting with acids such as monopicrate, mononitrate, monohydrochloride, monoacetate.5,6
N-containing heteroaromatic compounds are important structural motifs found in many natural and synthetic compounds. Among them, benzimidazole and its derivatives are decisive nucleus structures used in drugs and materials.7 In 1962 benzimidazole was first discovered as tiabendazole and was found to show an anthelmintic property. In this heterocyclic scaffold, the formic acid carbon between the two nitrogen atoms is the most reactive region for possible sub- stitution(s).8 As a result of intensive research, it has been found that the main structure of benzimidazole has a number of pharmacological properties.9 First, researchers suggested that benzimidazole exhibited physiological effects similar to purines.10 A benzimidazole derivative with similar activity to vitamin B12 was synthesized by examining the degradation products of vitamin B12.11 Combining synthetic versatility and biodiversity, these unique compounds have many applications and significant potential. Combining synthetic versatility and biodiversity, these unique compounds have many applications and significant potential. Benzimidazole derivatives have recently been used medicinally to cure many diseases.
The ability of microbial agents to operate on surfaces in the work environment and to be included in the environment through surfaces that are permeable to the external environment poses a great threat to employees. Since biological risk factors cause different infections in terms of employee health, the control of these factors is vital for occupational hygiene.
Especially after 2000, research activities related to the development of antimicrobials from benzimidazole seeds have increased. By combining 2-alkylthiobenzimidazole with the-lactam ring, molecules with strong antibacterial and antifungal activities were produced.12 Güven et al. showed that 1-substituted benzimidazole compounds showed weak antimicrobial properties.13 It has been reported by Halloway et al. that the 2-iminobenzimidazole compound has a high antibacterial potential by inhibition of trypanothione reductase.14 By binding heterocyclic compounds such as chroman, -lactam, thiadiazole and oxadiazole to a benzimidazole core, potent antibacterial and/or antifungal new compounds were obtained.15
In this study, thiophene benzimidazole based polymer (TBIP) was synthesized by using Suzuki reaction between 2,5-thiophene bisboronic acid and 4,7-dibromo-1-methyl-2-octyl-1H-benzimidazole with the reaction yield of 65%. Then, the TBIP polymer salts were prepared by the reaction of excess ethyl bromide in acetonitrile (ACN). Finally, the -Br- ion on TBIP was also easily replaced with the -BF4- and -ClO4- by ion exchange reaction in water. The polymer salts can be soluble in ethanol and water as environmentally friendly solvents. Remarkable changes were observed in the Fourier-transform infrared spectroscopy (FTIR) spectrum of TBIP polymer and its salts. The molecular weight of the polymer salts determined by Gel permeation chromatography (GPC) was found as about 3-4 K corresponding to 5-6 repeating units. In the cathodic scan of cyclic voltammograms (CV), the reduction peak was observed at TBIP salts arising from the cationic form of the benzimidazole unit. According to the UV-Vis spectrum in the methanol solution and thin film on the glass surface, TBIP and its salts can absorb until 400 nm corresponding to the bandgap of 3, 10 eV. Atomic force microscopy (AFM) measurements of thin film revealed that porous film can be obtained from the TBIP salts. We determined that the 10% solutions of the TBIP polymer (prepared in 96% alcohol) were showed antimicrobial activity against Staphylococcus aureus (Gram positive), but no antimicrobial activity was showed against Esherichia coli (Gram negative). In addition, only TBIP-BF4 was showed antimicrobial activity against Candida albicans (yeast).

Intrumentation. All chemicals were supplied from Aldrich Chemical and used without further purification. 4,7-dibromo-1-methyl-2-octyl-1H-benzimidazole was synthesized according to previously published procedures.16 FTIR spectra were obtained using Perkin Elmer Spectrum One device (with ATR system) (4000-650 cm-1). 1H-NMR spectra of TBIP and its salts were used by Bruker Avance DPX-400. Measurements were recorded at 25 °C using deuterated CHCl3 (for TBIP), deuterated dimethylsulfoxide (DMSO, for TBIP salts) and tetramethylsilane. GPC analyses of the TBIP polymer and salts were conducted with an Agilent 1260 HPLC instrument. Electrochemical characterizations of TBIP salts were carried out with CH Instruments 617D electrochemical workstation out under argon atmosphere. All electrochemical measurements were carried out in a cell containing a support electrolyte and a triple electrode system (1- Working electrode-platinum disk, 2- Reference electrode-Ag wire and 3- Counter electrode- Pt wire). All electrochemical measurement was performed containing 0.1 M TBAPF6 ACN solution was used as the supporting electrolyte. The potentials were calibrated according to the ferrocene redox couple Eo(Fc/Fc+) = +0.41 V vs. Ag/Ag+. Analytic Jena Speedcord S-600 diode-array spectrophotometer was used for UV-Vis absorption spectra of the TBIP solutions and films. The TBIP polymer and its derivatives morphologies were investigated by the AFM technique (Nanosurf Naio).
Synthesis of TBIP and Its Salts. In a two-necked 100 mL balloon, 2,5-Thiophenediylbisboronic acid (1) (0.855 g, 5 mmol) and 4,7-dibromo-1-methyl-2-octyl-1H-benzimidazole (2) (2.01 g, 1 mmol) were dissolved in 20 mL of Toluene and 5 mL of 2.0 M K2CO3, and the solution was purged with argon for 15 min. Pd(PPh3)4 (0.231 g, 0.2 mmol) was added to the reaction mixture at room temperature under an argon atmosphere. The mixture was stirred at 110 oC under argon for 24 h. The colorless solution turned to brown after an hour. After 24 h, bromo benzene (0, 15 g, 1.0 mmol) was added to the mixture. After that 2 h, benzene boronic acid (0.12 g, 1.0 mmol) was added, and the mixture was further stirred for another 2 h to complete the end-capping reaction. The polymer was precipitated in hexane and filtered and finally dried under vacuum at 60 °C overnight to afford TBIP polymer (TBIP: 1.062 g; yield 64%). In the second step, The TBIP polymer (800 mg, 2.4 mmol) was dissolved in the 50 mL of Acetonitrile. An excess amount of bromoethane (2.592 g, 24 mmol) was added to the solution. The mixture was stirred at 80 oC for 18 h. After the cooling of the reaction mixture, the solvent was evaporated to obtain the TPIB-Br salt. Finally, TPIB-Br (0.22 g, 0.5 mol) was dissolved in the 20 mL of ethanol. The mixture poured in to 0.025 M 20 mL NaClO4 or NaBF4 solution. The precipitated TBIP-ClO4 or TBIP-BF4 polymer salts were filtered and finally dried under vacuum at 60 °C overnight (TBIP-Br: 0.920 g; yield 94%, TBIP-ClO4: 0.21 g; yield 82%, TBIP-BF4: 0.22 g; yield 93%) (Scheme 1). 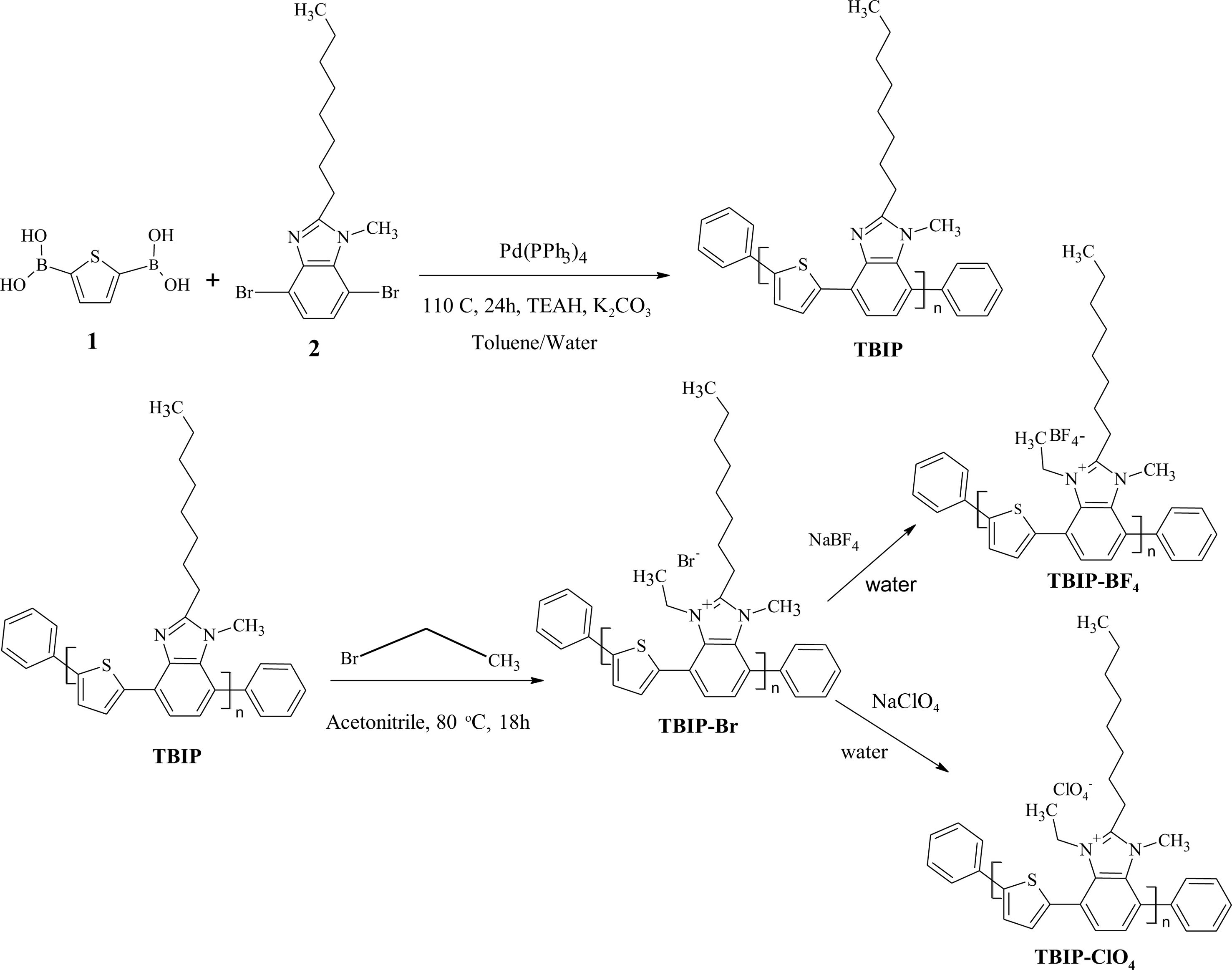 Scheme 1. Synthetic route to TBIP polymer and its salts.

In this work, a new thiophene benzimidazole based polymer (TBIP) was synthesized by using Suzuki reaction between 2,5-thiophene bisboronic acid and 4,7-dibromo-1-methyl-2-octyl-1H-benzimidazole. Then, the TBIP polymer salts TBIP-Br, TBIP-BF4 and TBIP-ClO4 were obtained, respectively. According to UV-Vis spectra, the absorption band of TBIP centered at about 280 nm was slightly shifted to a higher wavelength due to converting a charged form of benzimidazolium unit. Thus, multiple oxidation peaks starting from the 0.75 V (vs. Ag wire) are attributed to methyl benzimidazole subunit and thiophene based conjugated the main chain, respectively, slightly shifted to higher potential upon occurred benzimidazolium salt of TPIB polymer. While the AFM images of TBIP exhibited that homogeneously dispersed and smaller particles were observed on the film surface, TBIP-Br and TBIP-ClO4 have rougher surface. In addition, TBIP and its salts were showed antimicrobial activity against S. aureus ATCC 6538 and no antimicrobial activity against E. coli ATCC 1301 and ATCC 25922. The increase in antimicrobial activities against S. aureus ATCC 6538, is an important dataset for the control of biological risk factors and occupational hygiene. “S. aureus” bacteria can reach colonization sites in the human body through respiration or surface contact, causing negative consequences, especially food poisoning. In addition, the antimicrobial effect on “C. albicans” type yeasts is of great importance, especially for female worker health.