In recent years, research relating to polyurethane has been growing because of the lightness, low cost, and favorable mechanical properties of this material. The increased usage areas of polyurethane in tribological systems make it very important to determine its wear behavior. This study focuses on the wear characterization of polyurethane composites reinforced with glass fiber, SiC, and Al2O3. The wear tests were carried out using a pin-on-disc test apparatus against an abrasive counter-face at different applied loads (5 and 10 N). Scanning electron microscopy was used to observe the damage on the worn surfaces. The wear experiments clearly demonstrated that the reinforcement materials significantly affected the tribological properties of the polyurethane composites. In addition, it was observed that particle reinforcement was more effective than fiber reinforcement under experimental conditions. Consequently, polyurethane with glass fiber, SiC, and Al2O3 fillers would be a suitable candidate for use in tribological applications.

This study focuses on the wear characterization of polyurethane (PU) composites reinforced with glass fiber, SiC, and Al2O3 samples produced by vacuum silicon casting. The wear experiments clearly demonstrated that the reinforcement materials significantly affected the tribological properties of the PU composites. 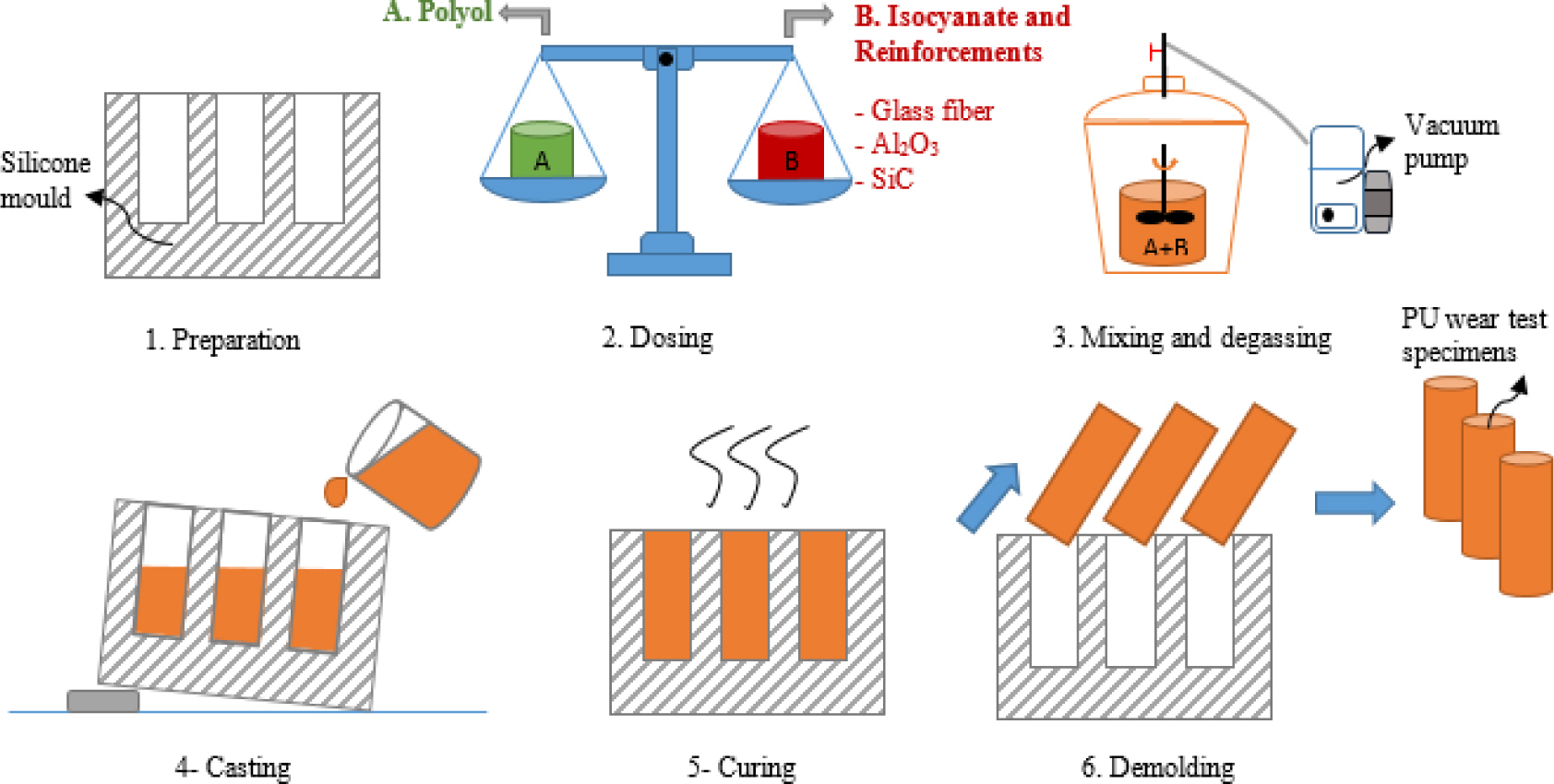 Vacuum casting is a widely used rapid prototyping method. In cases where the number of pieces to be produced is low, its high mold accuracy,1,2 low cost,3 and adaptability to different molds and resins4 contribute to the attraction of the vacuum casting method. Vacuum casting is frequently used in defense industry applications where the number of parts to be produced is low, during the prototype production stages of automobiles, and during the restoration of classic vehicles. This technique allows faster and higher-strength products than with additive manufacturing (three-dimensional printers).5
In the vacuum casting method, silicone is often used as the mold material when the number of pieces is fewer than 30. Because of the degradation occurring in the silicone mold when castings are made for more than 30 pieces, different materials are preferred in this case.6 Polyurethane (PU) is one of the most commonly used casting materials in silicone-mold vacuum casting method. Polyurethane vacuum casting is used for industrial products that do not involve mass production7 or rapid prototyping5 and in various research areas.8 Various reinforcement materials are added to polyurethane resins to improve their mechanical and tribological properties. The reinforcement ratio and the reinforcement material both have an important effect on the mechanical properties of the polyurethane.
Carbon fibers (CF),9,10 glass fibers (GF),11,12 and other reinforcement materials are widely used in PU because of their high hardness, high specific strength, and outstanding wear resistance.13 The improvements achieved in the mechanical and tribological properties of reinforced polyurethane materials manufactured by traditional methods have led to the idea of creating reinforcements for PU materials produced via vacuum silicon casting.
This research aims to produce industrially applicable and utilizable composite materials beyond laboratory-scale studies.14-17 For this purpose, chopped GF, silicon carbide (SiC), and aluminum oxide (Al2O3) were added to PU test samples produced by vacuum silicon casting. The effects of the reinforcement materials on the wear characteristics of the polyurethane were investigated. In addition, the weight ratios of the added reinforcement materials were systematically increased to determine the optimum reinforcement ratios.

Production of Silicon Mold and Reinforced PU Test Samples. The silicone mold was prepared first to produce the PU wear test specimens. During the silicone mold preparation phase, master steel samples (Ø10×25 mm) manufactured in the size of the wear-test samples were used. These samples adhered to the base surfaces of cylindrical containers, which were then filled with mold silicone. The material used was room-temperature vulcanizing (RTV-2) silicon with a Shore A hardness value of 20. During the silicone preparation process, the mold silicone was mixed with the hardening agent and kept under vacuum for 10 min. The silicone mixture was poured into the prepared cylindrical containers over the cylindrical samples adhered to the base surface, and then kept under vacuum for 20-25 min, thus preventing the formation of air bubbles on the surfaces of the test samples. After degassing, the whole structure was kept in an oven at 40-45 °C for 12 h to achieve better dimensional accuracy.18 The steel samples were removed from the silicone mold that had been cured in the oven, making it ready for casting. The silicon molding process is shown schematically in Figure 1.
The polyurethane matrix material used in the experiments consisted of polyol and isocyanate compounds in a ratio of one-to-one by weight. The chopped GF, SiC, and Al2O3 were added to the PU test samples to be produced by vacuum silicon casting. Figure 2 presents SEM images of the reinforcement materials. The reinforcement materials were added to the matrix material at 7.5, 15, 22.5, and 30% by weight. Due to the very short curing time after mixing the polyol and isocyanate, the reinforcement materials were first combined with the isocyanate. The reinforcement materials along with the isocyanate were mixed in a mechanical mixer at 180 rpm for 3 min. Later, the polyol was added to the isocyanate-reinforcing material mixture and mixed at 180 rpm for an additional 3 min. The mixture was poured into the silicone mold and allowed to cure under vacuum for 30 min. Finally, the cured test specimens were removed from the silicone mold and made ready for the abrasion test. The production of the reinforced PU test samples is shown in Figure 3.
Pin-on-disc Wear Tests. The wear tests were carried out in accordance with ASTM standard G99 using a pin-on-disk apparatus under dry test conditions. A PU sample of Ø10×25 mm in diameter was used as the pin and 200-grit abrasive paper was used with an abrasive disc as the counter-face during the wear test. The wear test was carried out at a constant sliding distance of 100 m under two different loads of 5 and 10 N at a speed of 1.2 m/s. The pin-on-disk test apparatus is shown in Figure 4.19
The applied load on the specimen was recorded during the wear test for the calculation of the friction coefficient (CoF), which was found by using eq. (1).19

The frictional force and the normal load on the specimen are symbolized by F and P, respectively. Eq. (2) expresses the calculation of the volume loss by using the weight loss.

In this paper, PU composites reinforced with GF, Al2O3, and SiC were fabricated and the effects of the filler materials on the tribological properties were investigated.
Wear experiments clearly demonstrated that the reinforcement materials reduced the volume loss and SWR significantly. Therefore, the GF, Al2O3, and SiC fillers improved the wear resistance of the PU. No significant difference in effect was found between the Al2O3 and SiC reinforcements, although the GF-filled PU provided a lower CoF than the unreinforced PU. The GF exhibited a self-lubricating effect on the contact surface between the specimen and the abrasive. The SiC and Al2O3 particle-reinforced PU composites exhibited higher CoF values. The highest CoF was obtained in the Al2O3-reinforced PU under all test conditions. The worn surfaces of the SiC-, GF- and Al2O3-filled PU displayed exposed fillers, gaps, and wear debris and grooves caused by the peeling of the PU matrix. Where the gaps had expanded, the fillers exposed to the counter-face were ultimately removed. The exposed fillers acted as hard particles and reduced the counter-face contact area; thus, the volume loss of the filled PU was significantly reduced.