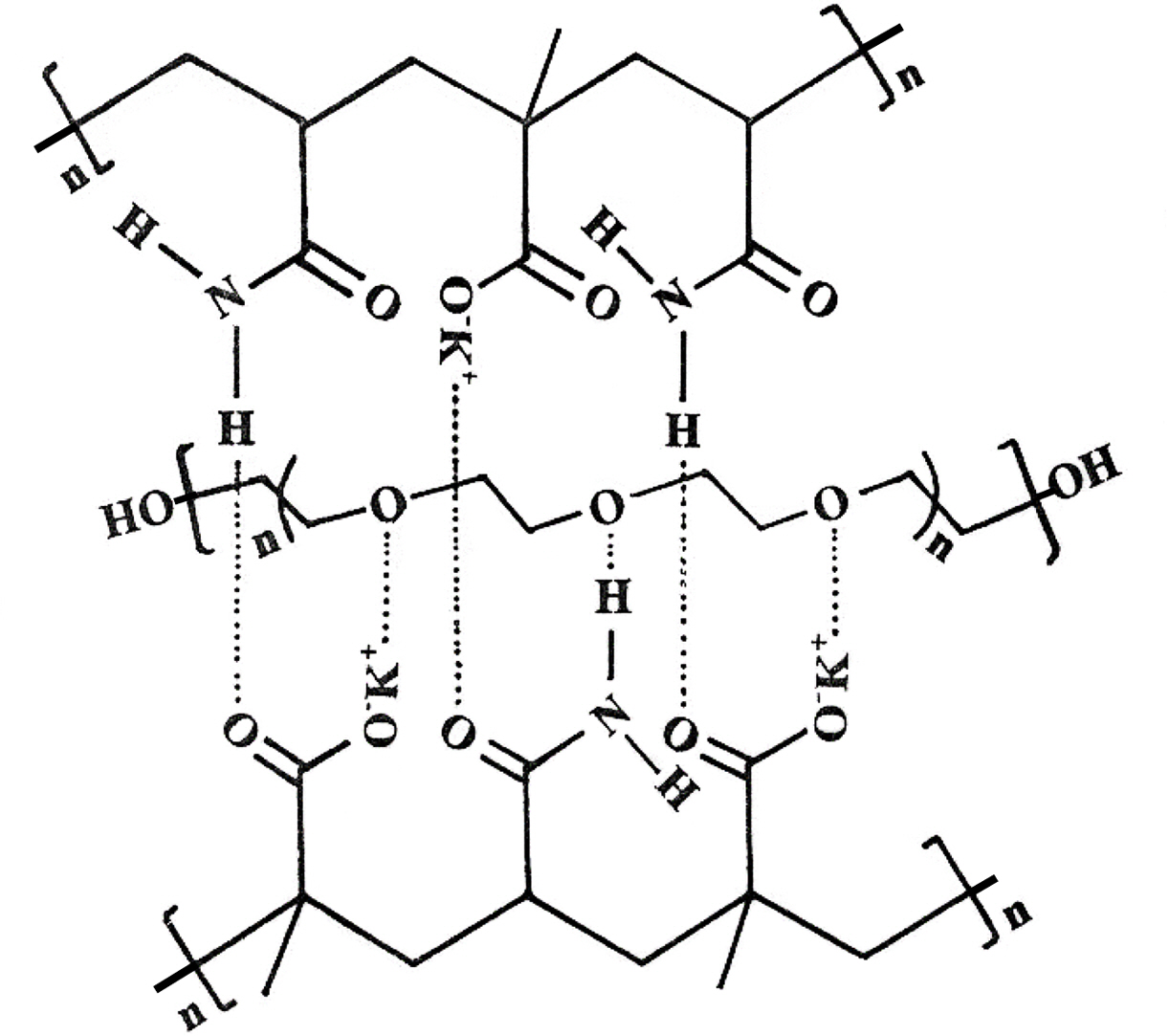 Hydrogels are three-dimensional polymer networks that can accommodate a massive quantity of water in their matrix. They carry ionic and polar functional groups like amides,1-3 amidoxime,4 carboxylic acid,3,5-8 hydroxamic acid,9 hydroxyl,5,10 phosphoric acid,11 sulphonic acid1 etc. on a flexible polymer backbone that make these polymers hydrophilic and swell-able. The hydrogels are usually employed for pollution remediation from water because they can absorb and retain the pollutants by ion-exchange, ion-dipole interactions, hydrogen bonding, dipole-dipole interaction and/or van der Walls forces. For example, they are employed to remove dyes from textile industry wastewater,1,2,9 bovine serum albumin,6 drug delivery system,7 insect pest management,12 entrapment of protein and peptides,11 removal of heavy metal ions,1,3 extraction of uranium compounds from seawater4 etc. One of the focus of this study is water absorption capacity and kinetics of water absorption-desorption of the hydrogel synthesized as these are essential characteristics of the hydrogels for multiple applications.6,9,13-17
A combination of two or more polymers or additives in polymers may enhance the characteristics of the hydrogels. For example, poly(arylamide) mixed with poly(acrylic acid) results in faster swelling kinetics, which is beneficial for removing unwanted water from the oil field.8 Other examples include: addition of maleic acid in acrylamide hydrogel improved swelling and adsorption of BSA,6 poly(hydroxyethyl methacrylate-hydroxyethyl acrylate) for fabrication of soft contact lenses,10 temperature-responsive properties by adding N-isopropyl acrylamide in acrylamide hydrogels,2 chitosan grafted with poly(acrylic acid-acrylamide) for high swelling behavior with salt and pH-response properties.18 Removal of uranium in the presence of other metal ions from an aqueous solution is a challenging job that often required special matrix or special preparation methods/techniques. To solve this problem, the combination of polymeric hydrogels was found very useful, e.g. poly(acrylamide-ethylenediaminetetraacetic acid) hydrogel,3 poly(2-hydroxyethyl methacrylate/maleic acid) hydrogels,5 natural occurring polymer chitosan with polyvinyl- alcohol,19 poly(vinylpyrrolidone/acrylic acid) hydrogels,20 chitosan entrapped in poly acrylamide,21 poly(N-iso-propyl acryl amide/maleic acid) hydrogels22 etc. This study explored improving uranyl ion removal from polluted water by addition of poly(ethylene glycol) in poly(acrylamide-potassium methacrylate).

Chemicals. All chemicals were of analytical grade and were used as received. Acrylamide, poly(ethylene glycol) [Mw ~6000 Da], uranyl nitrate, chromium nitrate, sodium acetate, boric acid, sodium chloride, sodium hydroxide, ammonium chloride, benzene, n-heptane, and potassium hydroxide were purchased from Merck. N,N'-methylene-bis-acrylamide, and methacrylic acid were obtained from Fluka. Potassium persulphate, potassium sulphate, calcium chloride, potassium and hydrochloric acid were purchased from Riedel-de-Haёn. Demineralized distilled water having conductivity ~1.5 μS/cm was used in all the experiments.
Synthesis of Hydrogels. The known amount of poly(ethylene glycol) was dissolved in 50 mL of water at 65 °C under constant stirring for one hour, and then the solution was cooled to room temperature. Acrylamide solution (10%) was prepared by dissolving 5.0 g acrylamide in 50 mL of distilled water. Then 6.02 g of methacrylic acid was neutralized in an ice bath by drop-wise addition of 4 N KOH solution to 75% neutralization. In the subsequent step, all three solutions were mixed together under constant stirring of 200 rpm for one hour at room temperature. The pH of the resulting mixture was 4.9 to 5.0 in all the experiments. N,N'-methylene-bis-acrylamide was added as a cross-linking agent.
Potassium persulphate was used as an initiator in this study and was kept at 1% of the total monomers used. The mixture was transferred to poly(vinyl chloride) straws of 7 mm diameter, having one end sealed. After sealing the other end of the straws, the mixture was polymerized in a water bath at 75 °C for 2 h. Both monomers i.e. potassium methacrylate & acrylamide undergone polymerization in the presence of N,N'-methylene-bis-acrylamide as a cross-linking agent as given in Scheme 1. Poly(ethylene glycol) formed an interpenetrating network with newly formed cross-linked poly(potassium methacrylate-acrylamide). The straws were then cut into 25 mm pieces and the hydrogel was removed from the poly(vinyl chloride) shell material of the straws. The pieces of hydrogels were made to swell in excess demineralized distilled water until equilibrium was established, followed by repeated washing with fresh demineralized distilled water in order to remove any unreacted monomers left. Then, these synthesized hydrogels were repeatedly subjected to five water absorption/desorption cycles with the subsequent inspection to ensure no sign of any damage. The hydrogel samples were then air-dried in a fume cupboard at room temperature in a dust-free environment until they reached a constant weight. A NICOLET 6700 FTIR spectrophotometer from Thermo Fisher Scientific, US was employed to record the FTIR spectra from 4000-400 cm-1 using Attenuated Total Reflectance mode (ATR). Moisture contents present in the samples were minimized prior to analysis. 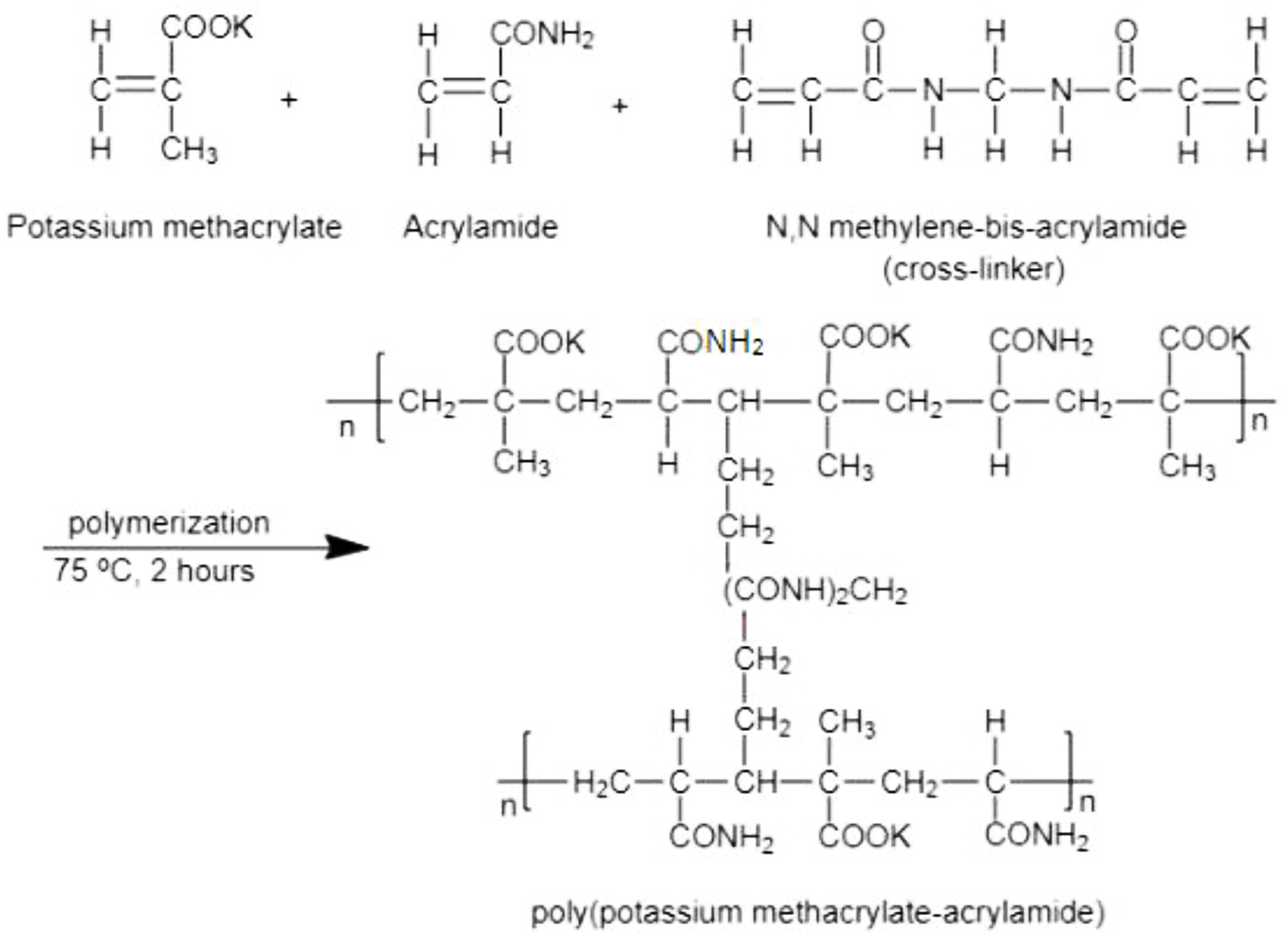 Scheme 1. Polymerization of potassium methacrylate and acrylamide in the presence of N,N'-methylene-bis-acryamide as a cross-linking agent.

Equilibrium Swelling Studies. A piece of the dried hydrogel was weighed and immersed in water at 25±0.1 °C. The hydrogel was then removed from the water after a known interval of time (t), and subsequently surface dried with the help of a laboratory tissue paper, and weighed. The hydrogel was immersed in the water again. The process was repeated until a constant swollen weight was achieved. The percentage mass swelling and the equilibrium water content of the hydrogel were calculated by using the following eq.

Where t1/2 is the time at which the swollen volume of the hydrogel is one half of the swollen volume at equilibrium and l is the radius of the cylindrical hydrogel samples at the time of completion of the polymerization i.e. 4 mm, which is the inner radius of the poly(vinyl chloride) straw in which the polymerization reaction was carried out.
Effect of pH and Ionic Strength. To investigate the swelling of a synthesized hydrogel in different pH media, buffer solutions were prepared by using the following mixture solutions:23 KCl-HCl 0.1 M in Cl- for pH 1-3, CH3COONa-CH3COOH 0.1 M in CH3COO- for pH 4-6, NH4Cl-NH4OH 0.1 M in NH4+ for pH 6-7.5, H3BO3-NaCl-NaOH 0.1 M in Borate for pH 8-10, and a KCl-NaOH mixture 0.2 M was used for pH 12-13. The salt solutions of KI, KCl, or CaCl2 were 0.9% w/v in water.
Adsorption Study. Standard solutions of different concentrations of chromium nitrate and uranyl nitrate were prepared. In each case, dried hydrogel samples weighing 0.15 g were added into 50 mL of various solutions of uranium or chromium in a conical flask with a stopper and left at room temperature without stirring for 24 h. The residual solution in the flask was analyzed for chromium or uranium content in ppm by an ICP 6500 inductivity coupled plasma-optical emission spectrometer (ICP-OES) from Thermo Fisher Scientific, UK with ITEVA (Ver. 8.0) operating software. The instrument was equipped with a high performance solid state charge injection device camera system. The high precision peristaltic pump was used for sample injection into plasma with 12 rollers and 4 channels with adjustable speed (0-12pm). Uranium and chromium standards were used for the calibration of ICP-OES. The adsorption capacity of the hydrogel was calculated from the difference between the initial and the final concentrations of the metal ions by using following relationship.

Where qe is the adsorption capacity in mg/g, C0 and Ce are the initial and final concentrations of the metal ions, respectively in mg/L, V is the total volume of solution in liters, and m is the weight of the dried hydrogels in grams.
The hydrogel exhausted after the adsorption was regenerated with 2 M HCl and repeatedly re-used for about 5 or 6 cycles with no damage noticed in the hydrogel. 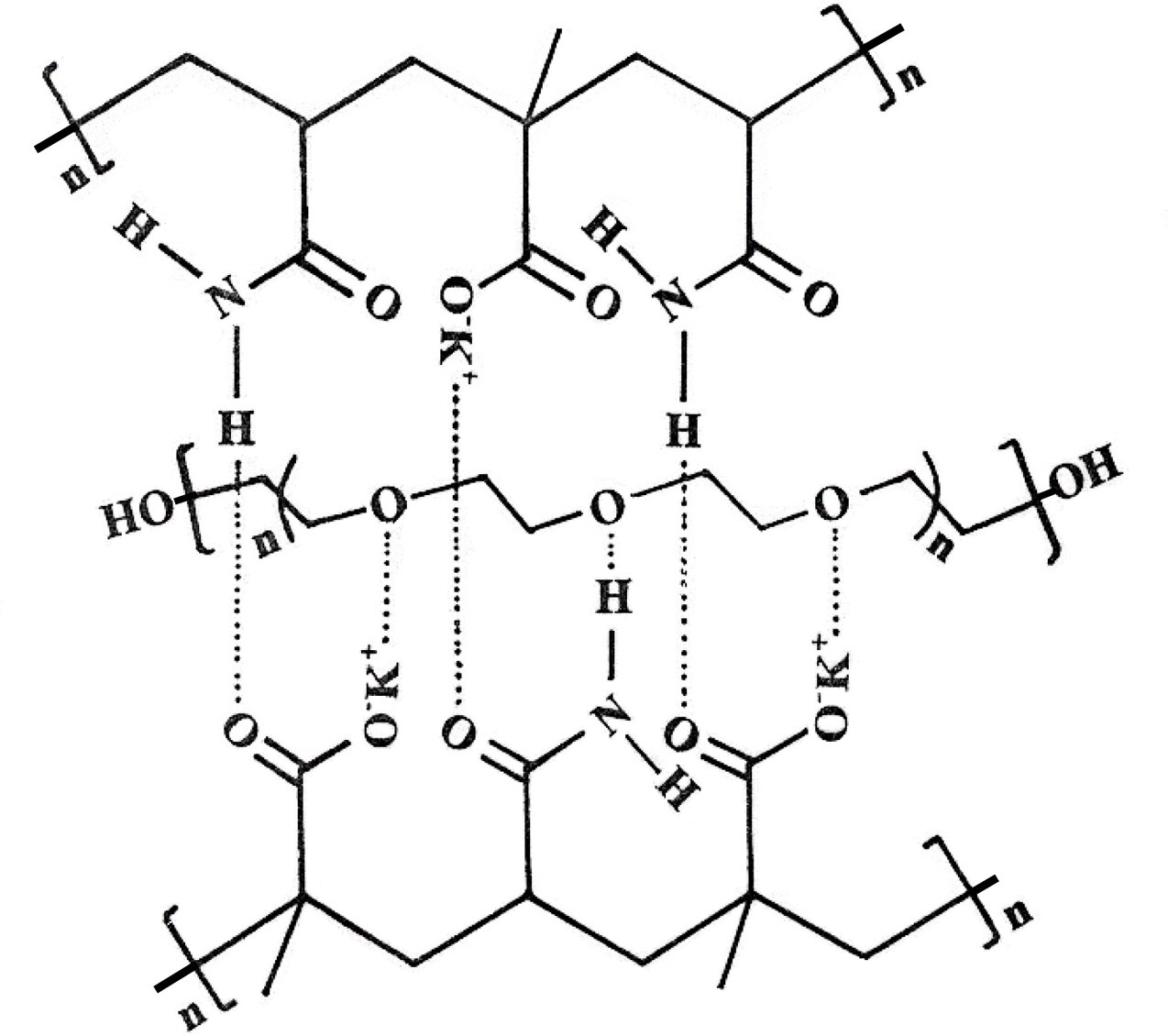 Scheme 2. Shows the intermolecular bonding between the -COOK and -NH2 groups of two polymeric chains and ether oxygen of entwined grafted chain of poly(ethylene glycol) in copolymeric potassium methacrylate and acrylamide hydrogels.

This study reveals that adding poly(ethylene glycol) to poly(acrylamide-potassium methacrylate) hydrogel provides a new tool to adjust important hydrogel characteristics, like swelling in water, absorption kinetics, and capacity for heavy metal pollutant removal from wastewater. Specifically, the addition of poly(ethylene glycol) to poly(acrylamide-potassium) resulted in:
i) a decreased swelling of the hydrogel in water still increased absorption kinetics, and
ii) significantly increased adsorption capacity for heavy metal pollutants like chromium(III) and uranyl ions from polluted water. Uranyl ion, which is toxic and radioactive, could be removed from the water sample only after adding poly(ethylene glycol) in poly(acrylamide-potassium methacrylate) hydrogel.