The objective of this study was to examine changes in the dissolution rate of sodium-alginate/polyacrylamide (SA/PAM) hydrogel according to water temperature and concentration of cross-linking agent N,N'-methylenebisacrylamide (MBAAm). Results confirmed that swelling and dissolution rates of the SA/PAM hydrogel were increased when the temperature of the water was increased or the amount of MBAAm was decreased. When water temperature was increased, ionic crosslinks became unstable and amide bonds were broken due to hydrolysis, causing the hydrogel to rapidly dissolve in the hot water. Also, after the amount of MBAAm was decreased, ionic crosslinks became dominant and SA/PAM hydrogel became more vulnerable to hot water. Here, we analyzed the dissolution rate of hydrogel following temperature and MBAAm density changes. We also developed a selectively dissolvable water-blocking hydrogel that could be stable in cold water and become dissolved quickly in hot water.

The swelling and dissolution rate of the sodium-alginate/polyacrylamide (SA/PAM) hydrogel increase as the temperature of the water increases or the amount of N,N'-methylenebisacrylamide (MBAAm) decreases, which makes the ionic crosslinks get unstable and easily broken. To prove it, the swelling ratio and the concentrations of ions released from broken crosslinks were analyzed in different conditions. Based on the results, we developed the water-blocking hydrogel which is stable in cold water and easily removed by hot water. 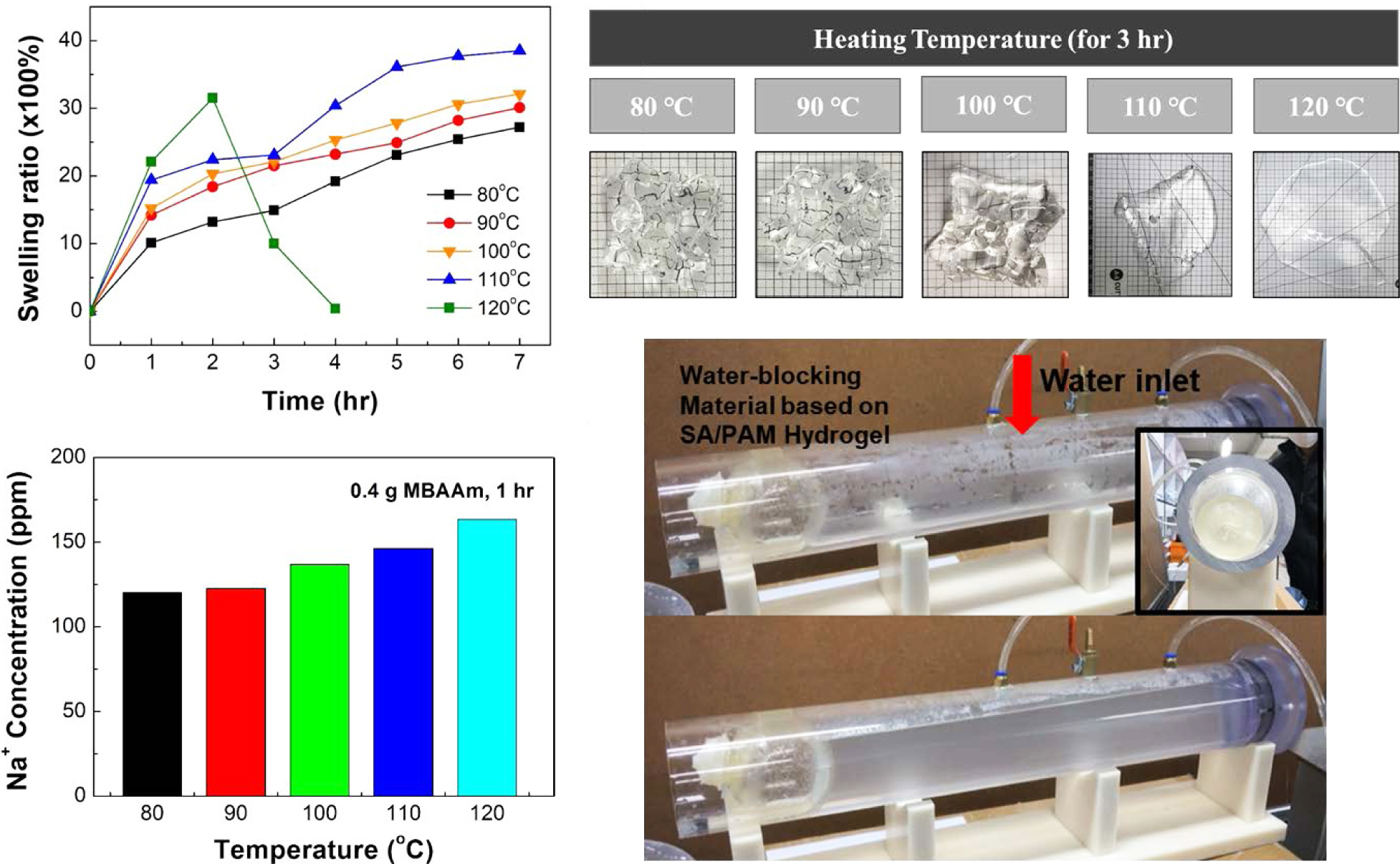 A hydrogel is a three-dimensional network of hydrophilic polymers having a moisture content of 90%. Because hydrogels consist of water with skin-like softness, they are safe for human body and easy to fabricate into complex shapes.
Hydrogels are regarded as promising bio-compatible mater- ials in various fields such as strain sensors,1-4 wastewater absorbents,5-8 and ultrasound imaging for diagnosis.9-12 In the agricultural field, the high moisture content and porous structure of hydrogels enable them to be stored and to supply moisture in landfills. It has also been proven that crop productivity can be improved by storing necessary nutrients inside a hydrogel and continuously releasing them for a certain period of time.13-15 In the medical field, the physicochemical similarity of hydrogels to human tissue has led to their application as scaffolds for tissue engineering,16,17 cell culture,18,19 and drug carriers.20,21
Despite these advantages, the weak mechanical properties of hydrogels have been major constraints. The fracture energy of hydrogel, such as a polyacrylamide hydrogel, is approximately 10 J∙m-2, which is 1/1000 of that of natural rubber (10000 J∙m-2). Fortunately, recent development of a sodium-alginate/polyacrylamide (SA/PAM) hydrogel has significantly improved mechanical properties of hydrogels. In 2012, SA/PAM hydrogel synthesized by adding sodium-alginate to polyacrylamide hydrogel was reported for the first time.12 An alginate chain has guluronic acid blocks forming ionic crosslinks through ions, thus enhancing mechanical properties and resilience of the gel. The fracture energy of SA/PAM hydrogel is 9000 J∙m-2, which is 900 times larger than that of normal hydrogels and similar to that of natural rubber.22
In this study, we determined the dissolution rate of SA/PAM hydrogel in water. Our results confirmed that the dissolution rate of SA/PAM hydrogels could be controlled by adjusting water temperature and cross-linker concentration. Ionic crosslinks between ions and alginate play a significant role in mechanical properties of SA/PAM hydrogels. When water temperature was increased and cross-linking agent concentration was decreased, the stability of ionic crosslinks was reduced, which broke them down and dissolved the hydrogel quickly. Amide bonds were also broken since hydrolysis became dominant rather than recombination reaction according to temperature and cross-linker concentration. Therefore, the dissolution rate varied depending on the water temperature and the concentration of the cross-linking agent.
Due to their excellent mechanical properties and dissolution rate control, SA/PAM hydrogels are suitable water-blocking materials for repairing pipes. The interior of an actual pipe is rough and uneven owing to oxidation and corrosion. With conventional water-blocking methods such as rubber-balloon method are used for pipes, such irregularities cannot be covered. Hence, the working environment becomes increasingly unstable because of water leakage. On the other hand, soft properties of hydrogels are sufficient to fill in surface irregularities, thus preventing water leakage. Because SA/PAM hydrogels are biocompatible,23 they are suitable as water-blocking materials for repairing or replacing pipes that transport water in our daily life. Finally, because dissolution rate can be controlled by adjusting water temperature and cross-linking agent concentration, SA/PAM hydrogel-based water-blocking devices can be easily removed without the process of taking them out by supplying hot water into the pipe after a repair or replacement, making them very convenient and efficient.
The SA/PAM hydrogel production conditions that provide the highest mechanical strength were selected by analyzing mechanical properties and microstructures of SA/PAM hydrogels according to the concentration of the cross-linking agent, N,N'-methylenebisacrylamide (MBAAm). Dissolution rate of the SA/PAM hydrogel was then analyzed according to water temperature and cross-linking agent concentration by examining the shape, swelling ratio, and Na+ concentration in water at each hour and the dissolution time. After manufacturing an optimal SA/PAM hydrogel water-blocking device based on results obtained, whether it could be used as an actual water-blocking material was determined by measuring water-proof time for each water temperature through a pipe model similar to the actual pipeline construction environment.

Synthesis of SA/PAM Hydrogel. SA/PAM hydrogels were synthesized with the following method. First, an acrylamide (DUKSAN, Korea) 50 wt% aqueous solution was prepared and stirred at room temperature for 24 h. Then 4.5 g of NaHCO3 (DUKSAN, Korea) was added to a sodium-alginate (Sigma-aldrich, USA) 2 wt% aqueous solution and stirred at room temperature for 48 h. If NaHCO3 was added immediately during the experiment, then the dissolution rate was low and the solution was not uniformly mixed. To make a cross-linker solution, a 1 wt% MBAAm (Sigma-aldrich, USA) aqueous solution was prepared and stirred at room temperature for 24 h and a 10 wt% aqueous ammonium persulfate (APS, Sigma-aldrich, USA) solution was prepared to make an initiator solution. Finally, a 10 wt% tetramethylethylenediamine (TEMED, Sigma-aldrich, USA) aqueous solution was prepared and stirred at room temperature for 24 h to make an accelerator solution.
These prepared solutions were weighed and mixed as follows. First, 12.44 g of 50 wt% acrylamide aqueous solution was added to 39.6 g of a mixed aqueous solution of sodium alginate and NaHCO3. Then, 0.4 g of 1 wt% TEMED aqueous solution and 1 wt% MBAAm were mixed and dissolved. The amount of MBAAm added was adjusted to 0.1, 0.2, 0.3, 0.4, and 0.5 g to prepare hydrogels with different concentrations of the cross-linking agent. Finally, after adding 0.62 g of 10 wt% APS aqueous solution, the mixed solution was placed in a mold, stirred using a glass rod, and heated in a 40 °C oven for 20 h. The mold was placed in a sealed container to prevent moisture loss.
Tensile Strength and Microstructure Analysis. The tensile strength of the hydrogel was analyzed using a universal testing machine (Yeonjin S-Tech, Korea) with a maximum load of 100 kg (1 kN). Hydrogel tensile specimens were prepared at size of 5 mm (Width)×5 mm (Height)×40 mm (Length). The initially analyzed length was set to be 20 mm by fixing each 10 mm up and down using a jig during the tensile test. The tensile speed was set at 10 mm/min until failure occurred. With regard to the hydrogel microstructure, hydrogel specimens with different MBAAm contents were frozen at 20 °C for 48 h, and then placed in a freeze dryer for 24 h. The microstructure of the cross-section according to the MBAAm content was determined using a field-emission scanning electron microscopy (FE-SEM, TESCAN, Korea).
Dissolution Rate Analysis According to Water Temperature and MBAAm Content. To confirm the effect of MBAAm content on dissolution rate, hydrogels with various MBAAm contents of 0.1, 0.2, 0.3, 0.4, and 0.5 g were analyzed at 100 °C. First, 400 mL of distilled water was heated to boiling. An autoclave container capable of maintaining a constant pressure and temperature was filled with boiling water. Then a 20 mm×20 mm×10 mm hydrogel specimen was placed in the autoclave container. Its weight, size, and shape were analyzed every hour to confirm swelling and dissolution. For accurate analysis, the size and weight were measured after removing water on the surface. The swelling ratio was calculated using the following eq.:

In the case of dissolution rate according to temperature, water-soluble state was analyzed at 80, 90, 100, 110, and 120 °C using a hydrogel containing 0.4 g of MBAAm, which had the highest mechanical strength.
Also, to confirm ionic bond breaking between alginate and sodium ions, concentrations of sodium ions were analyzed through inductively coupled plasma-atomic emission spectro- metry (ICP-AES, Agilent tech, USA) analysis of the aqueous solution in which hydrogels were dipped.

In this study, the dissolution rate of the SA/PAM hydrogel was analyzed according to the temperature of water and the concentration of MBAAm. Results showed that the higher the MBAAm concentration, the slower the swelling rate in the water at the same temperature.
The swelling ratio of hydrogel was increased rapidly with an increasing temperature. However, the swelling ratio rapidly decreased after 2 h at temperature above 120 °C. This means that sodium ions in the hydrogel escaped easily at a high temperature and the hydrogel dissolved in water quickly. Also, amide bonds were broken since hydrolysis became dominant rather than a recombination reaction, which accelerated the dissolution rate. Results of ICP-AES analysis confirmed that concentrations of sodium ions that escaped from the hydrogel increased as the temperature increased.
Results of analysis of change in swelling ratio according to MBAAm concentration confirmed that the higher the MBAAm concentration, the slower the occurrence of swelling in water at the same temperature. This was attributed to an increase in swelling resistance as the MBAAm concentration increased. However, in the case of the hydrogel with 0.1 g MBAAm, the swelling ratio increased the slowest because the increase in the swelling rate was cancelled by the increase of the dissolution rate. The SA/PAM hydrogel maintained its shape through chemical bonding by MBAAm and ionic bonding by alginate and sodium ions. When swelling in hot water, the ionic bond between alginate and sodium ions was easily broken as ions inside the hydrogel escaped. Therefore, the lower the MBAAm content, the more dominant the ionic bonding force and the faster the dissolution rate. Results of ICP-AES analysis confirmed that the concentration of sodium ions coming out of the hydrogel increased at a lower MBAAm content.
These results confirmed that SA/PAM hydrogel could be used as a water-blocking balloon for repairing heating pipe without needing a separate removal process. To determine whether effective water blocking was possible, a pipe with a diameter of 80 mm, which simulated a real pipe, was fabricated and an experiment was conducted under conditions similar to the real environment. Results confirmed that the SA/PAM hydrogel-based balloon could resist swelling for 310 min at 25 °C and 132 min at 60 °C, providing sufficient time to repair the pipe. Thus, such SA/PAM water-blocking material can be used to repair metallic pipes (such as copper pipes, steel pipes, and stainless steel pipes known to be able withstand high temperatures), household drainage pipes, and heat transport pipe used for urban heating.