Interpenetrating polymer networks (IPNs) that have silane resins as one of their components are industrially important due to their physical and chemical properties. The current study included preparation and characterization of two types of unsaturated silane monomers in order to prepare new types of IPNs with unsaturated polyesters (palatal). These monomers were characterized with Fourier transform infrared spectroscopy (FTIR) and nuclear magnetic resonance spectroscopy (1H NMR), and their molecular weights were determined by cryoscopy technique. The curing properties of the silane monomers and the IPNs were observed by differential scanning calorimetry (DSC), and several of thermal curing functions were determined, such as the initial curing temperature, optimum curing temperature, curing energy, activation energy and rate of curing. There was a significant decrease in the initial and maximum curing temperatures compared with the unsaturated polyester resin (palatal) due to the decrease in the activation energy from 105.4 to 77.3 ºC when the allyoxy silane monomer percentage was shifted from 5 to 20%. Meanwhile, the activation energy for the IPNs based on α-methyl-butenoxy silane decreased from 96.8 to 55.8 kJ/mol. 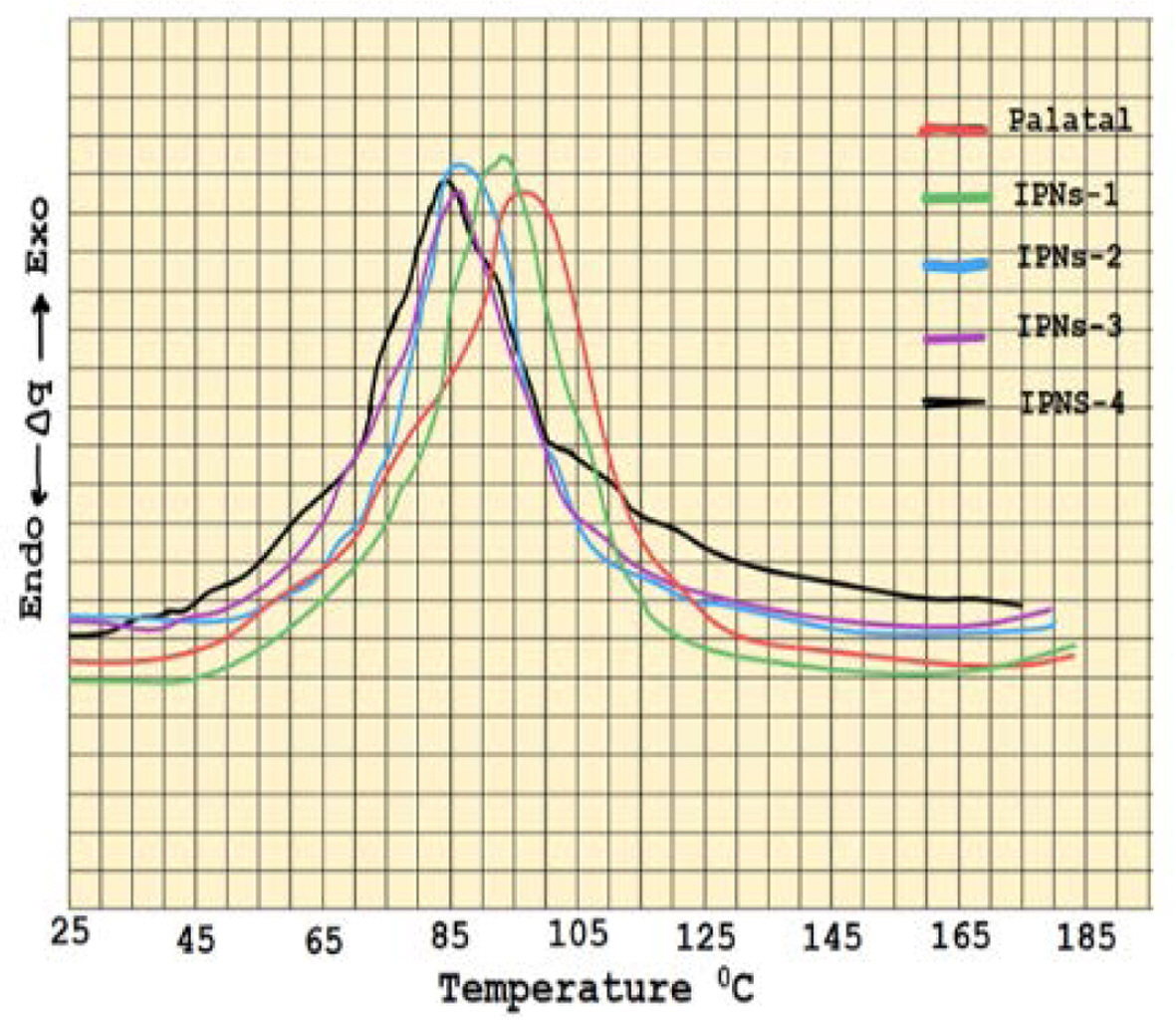 An interpenetrating polymer network (IPN) comprises two polymeric networks, one of which must at least have been synthesized and/or crosslinked in the presence of the other.1-3 However, there is no chemical linkage between these types of distinct networks.4,5 Preparing IPNs is often distinct from other methods that mix two or more polymers, such as physical blends or copolymerization.6-8 In certain cases, interpenetrating polymer networks (IPNs) can be made by polymerizing free radicals or cations with two multifunctional monomers or telechelic oligomers.9-11 Several types of IPNs exist, with each being influenced by the method used to synthesize multicomponent alloy.12-14 An IPN can be prepared by the sequential technique, which is by swelling a crosslinked polymer in a monomer and curing the agent of its corresponding polymer with subsequent polymerization of the monomer in swollen polymer matrix.15,16 When IPN is in the form of latex, it is known as latex IPN; it is also known as interpenetrating elastomeric networks (IENs).17,18
Another method of synthesizing IPNs is the simultaneous (SIN) technique. This technique requires blending the linear polymers, prepolymers, or monomers in some liquid from latex, solution or bulk together with their respective crosslinking agent, followed by evaporating the liquid vehicle, if present, and simultaneously curing the component polymers.19,20 If only one polymer of the combined polymers is crosslinked, then the material is referred to as semi-IPNs.21-23 There are a large number of polymers that have the ability to form lattice structures between them, and they are bonded with physical bonds (van der Waals) to produce constitutive networks, resulting in a broad range of properties that have different applications, including, in biomedical specialties, separation membranes and selective absorbents.24,25
The importance of IPNs lies in their ability to produce polymers with improved properties as a result of combining the unique properties of the polymers that form the IPNs. For example, it is possible to produce IPNs that possess the characteristic toughness and high thermal stability from mixing two incompatible polymers, thermoplastics and thermosets.26-28 Lin et al.29 were able to produce a new type of IPNs that included unsaturated polyesters with resoling, a type of phenolic resin. These polymers have a unique property of thermal stability in addition to their ability to prevent the formation of smoke and toxic gases during combustion.
Guhanathan et al.30 were able to prepare a three-component system of IPNs, including polyethylene-acrylonitrile-unsaturated polyurethane. This type of polymer possesses the mechanical properties (flexural and impact strength) surpassing that of unsaturated polyesters alone. Chung et al.31 were able to produce new types of hybrid IPNs that contain inorganic compounds in their composites. They reached the gelatinous state of alkoxysilane at a temperature of 60 ºC by using the nuclear magnetic spectroscopy technique. It was observed that the unsaturated polyester resin decomposed upon treatment with HCl acid. Finally, they “were able to form the IPNs by using the photopolymerization method of unsaturated polyesters resin by forming π-interactions between the aromatic ring of the unsaturated polyester resin and phenyltrimethoxysilane.
New IPNs have been referred to in recent years, and they are used in a variety of medical applications (hydrogels IPNs). They are divided into categories based on how the polymers are mixed or prepared. The first is known as a mechanical blend (no chemical bonds between the polymers) and the second is known as a graft copolymer (containing primary bonds between the polymeric components).32-34 Tissue engineers have long attempted to replicate native tissue's hydrophilicity and hierarchical architecture. These two properties work together to enable large-scale molecular rearrangements of the constituent bioactive polymers, resulting in specific material properties.35-37 Mahou et al.38 created a hydrogel IPN matrix containing collagen-quinine. These natural polymers showed great resistance to enzymes without altering the property of the embedded mesenchymal stromal cells. Compared to collagen, the results of the study showed a promising application of the IPN microspheres in the field of tissue engineering. Soni et al.39 investigated a pH-dependent system that included Poly(alcohol-carboxylate pullulan) loaded with the drug pirfenidone-loaded IPN microsphere. The results showed that the polymer degradation process in the stomach and intestine was needed to control the value of the pH. In addition to that, during a laboratory study of the enzyme degradation by pullulanase, it was observed that there were no toxic complications for the IPNs.
The present paper was focused on the synthesis of IPNs based on Palatal-silicone as well as investigating the curing parameters by using differential scanning calorimetry (DSC) technique.

Where R is the gas constant = 8.314 J·mol-1 K-1.
The curing of these monomers was initiated by ethyl methyl ketone peroxide and cobalt octate as accelerators. The curing reaction took place according to the free radical mechanism at the double bond to produce silicone resin, as shown in the following expected equations:
Similar curing behavior was valid with tetra (α-methyl butenoxy) silane. Figure 7 shows the DSC thermograms of tetra (allyoxy) silane and tetra (α-methyl butenoxy) silane monomers, indicating the presence of exothermic curing peak that has an optimum curing temperature at 80 and 77 ºC with activation energies 43.7 and 33.5 kJ/mol for two monomers, respectively.
The IPNs curing results of allyoxy and α-methyl butenoxy silane monomers with Palatal resin which are prepared in different weight percentages 5-20% of the silane monomers are shown in Tables 1 and 2. The DSC thermograms for the IPNs of both silane monomers (Figures 5 and 6) with Palatal showed one exothermic curing peak, confirming the formation of simultaneous IPNs. In addition to that, the DSC thermograms indicated that the exothermic curing peak of Palatal at the optimum curing temperature (97 ºC) shifted to higher curing temperature with increasing percentages of the reactive silane monomers. For example, in the case of both monomers, tetra allyloxy silane and tetra (α-methyl butenoxy) silane, the peak for curing temperature shifted from 97 ºC for Palatal resin to 83 ºC and 81 ºC for the IPNs containing 20% of monomers, respectively. Therefore, these silane monomers increased the reactivity of the Palatal towards polymerization which was very important from the technological point of view.
The rate of curing also increased with increasing weight percentages of the silane monomers (Tables 2 and 3). From the results shown in Tables 1 and 2, the monomer tetra (α-methyl butenoxy) silane had better cure properties than monomer tetra(allyloxy) silane in its ability to form IPNs with palatal resin as evident in Figure 7. The relationship between the monomer ratio in the compositions of IPN5-8 showed that there was a significant decrease in the activation energy value when the percentage of monomers increased. Moreover, from Figure 8, there was an important reduction in the curing temperature of the IPNs that had tetra (α-methyl butenoxy) silane in their composition compared to the IPNs that contained the tetra allyloxy silane.
The results of the thermal curing technique of the IPNs could be compared using the DSC device as shown in Table 5. The activation energy of the IPNs consisting of palatal and (tetra allyloxy silane) significantly decreased by increasing the ratio of monomer (tetra allyloxy silane) from 128.3 to 77.3 kJ/mol.
The same effect was observed for the monomer tetra (a-methyl butenoxy) silane, with a decrease from 128.5 to 55.8 kJ/mol. However, the effect of monomer tetra (a-methyl butenoxy) silane was greater than that of monomer (tetra allyloxy silane), lowering the value of the IPNs’ activation energy. This change can be attributed to the effect of the (a-CH3) group in the monomer (a-methyl butenoxy); with the former pushing the polymeric chains from each other or in polymeric network. In addition to that, from Table 5, there was a significant increase in the curing energy needed for the process of polymerization which formed IPNs that included tetra (a-methyl butenoxy) silane with palatal compared with the IPNs that included tetra allyloxy silane and palatal. This can be attributed to the effect of the electron-donating group (a-CH3) on the rate of curing.
There is a lack of studies related to the preparation of IPNs that include silane monomers palatal. However, some references have been obtained, including the preparation of IPNs consisting of silane monomers with epoxy resin.40-42 These studies have confirmed that these monomers have a similar effect to the ones obtained in this study with regard to decreasing the activation energy and increasing the curing energy.43-45 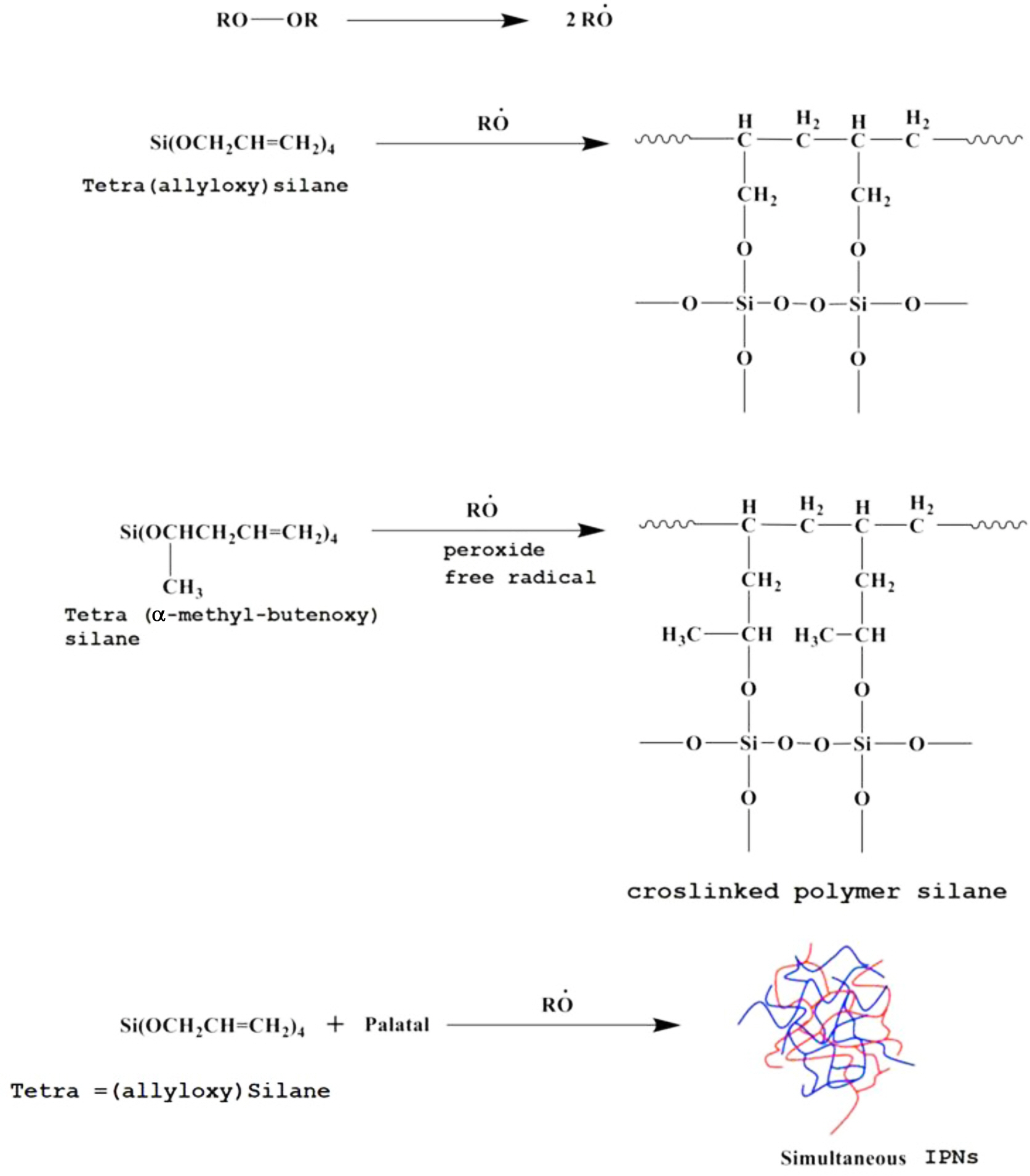