By employment of a semi-rigid carboxylic acid ligand 5,5' -((5-carboxy-1,3-phenylene)bis(azanediyl))diiso- phthalic acid (H5L) with the -NH- joints, a new porous metal-organic framework (MOF) based on Zn(II) ions as nodes has been generated in success, and its chemical formula is {[Zn3(m3-OH)(L)(H2O)3]·3DEF·H2O}n (1). Owing to its Lewis basic -NH- joints and the π-electron-rich benzene rings on the skeleton, the activated complex 1 offers a favourable pore environment for binding C2H2 in preference to CO2 and CH4. The inhibitory activity of compound on the liver cancer viability was determined through exploiting the Cell Counting Kit-8 kit. Afterwards, the invasion and migration ability for the liver cancer cells was measured after indicated treatment. Multiple binding interactions are identified by performing the molecular docking simulation, indicating the stabilization effect of the Zn complex towards the target protein, and therefore, the proposed drug molecule exhibits good anticancer activities.

By employment of a semi-rigid carboxylic acid ligand with the -NH- joints, a new porous Zn-metal-organic framework (MOF) has been prepared. The activated MOF offers a favourable pore environment for binding C2H2 in preference to CO2 and CH4. Furthermore, its anticancer activity has been studied via Cell Counting Kit-8 kit. 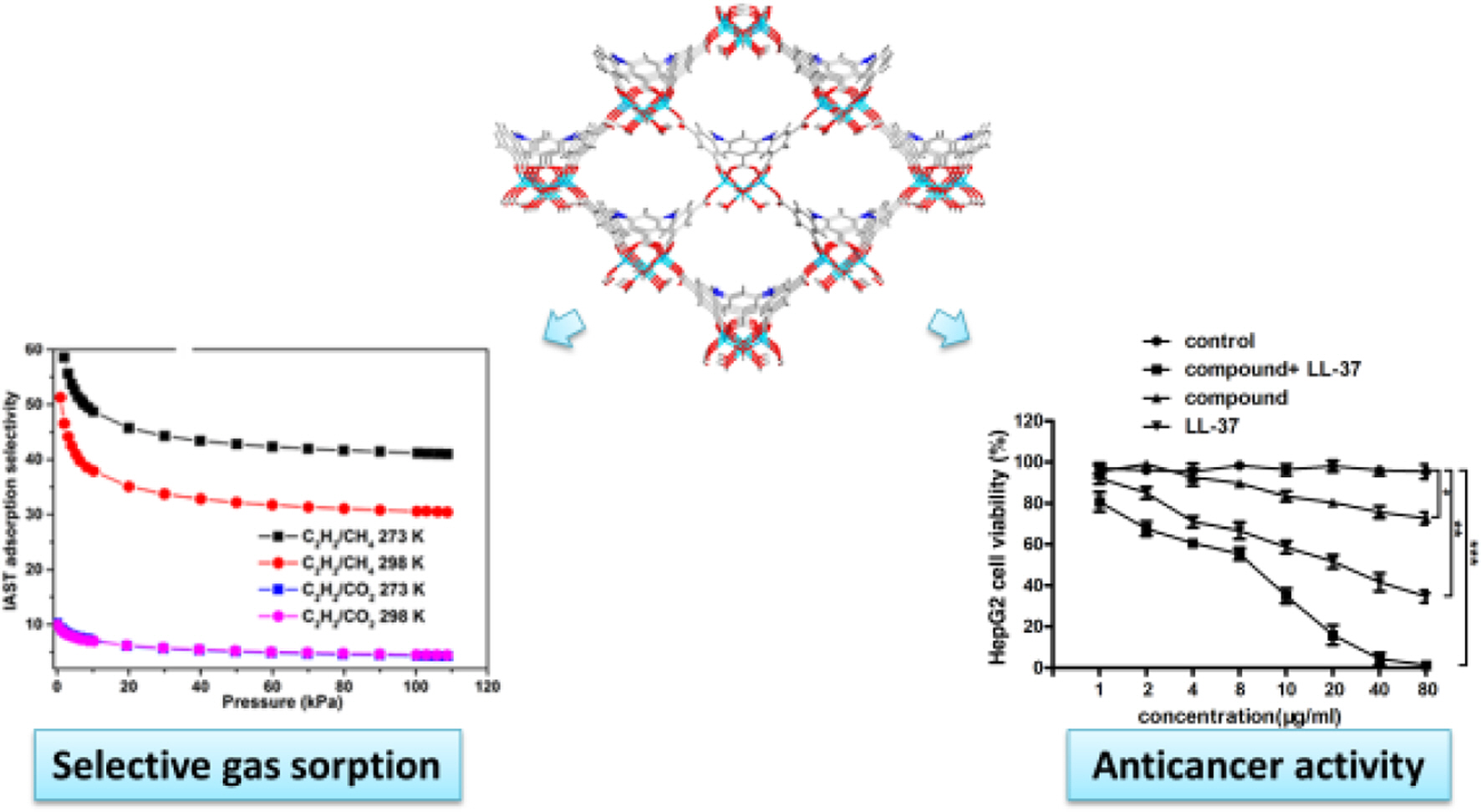 Primary carcinoma of liver (hereinafter referred to as liver cancer) is one of the common malignant tumors in our country.1 According to statistics recently, the annual mortality rate of liver cancer in China was 20.37 per 100000, ranking second in the ranking of malignant tumor deaths, second only to lung cancer in cities, and second only to gastric cancer in rural areas.2 The maturity of surgical techniques and the develop- ment of non-surgical treatment methods such as various local treatments have significantly improved the prognosis of liver cancer compared with the past.3 However, new candidates for the liver cancer therapy were still need to be explored. LL-37 is the only Cathelicidin antimicrobial peptide found in the human body. It has a cancer-promoting effect in ovarian cancer, malignant melanoma, skin squamous cell carcinoma, prostate cancer and other tumors, but as a tumor suppressor in liver cancer, leukemia and other tumors. In this, research, the promotion effect of the new compound synthesized in this research on the anti-cancer activity of LL-37 was evaluated.
As a kind of reactive and flammable highly gas, the acetylene (C2H2) is extensively utilized in cutting, welding, and lighting the metals (acetylene-oxygen flame).4 In these applications, high purity the C2H2 with high-purity is usually required; however, the impurities, for instance, methane (CH4) and carbon dioxide (CO2) always present in the production of acetylene.5 The critical temperature, sublimation point along with molecular size of CH4, CO2 and C2H2 are similar, which makes their separation challenging. As a result, the appearance of microporous materials containing the performances of selective adsorption (such as metal organic frameworks, MOFs) is a feasible choice in this field. MOFs as a novel type of porous materials, they are constructed from organic ligands and metal ions and reveal great potential in the catalysis, chemical separation, gas storage, molecular recognition, biomedicine, ion exchange, sensing and other fields.6-11 With the assembly of given organic ligands and well-defined secondary building units, a variety of MOF architectures with low skeleton density, large specific surface area along with regular pore has been designed. In the past several years, the researchers are committed to fine-tuning the surrounding environments and pore architecture to investigate the practical application of MOFs.12-17 On the other hand, Zinc is an important biometal essential for life, which is second only to iron in terms of its concentration in the biological systems and is present in more than 300 enzymes of living organisms. Recent studies provided compelling evidence that Zn(II) derivatives have proved to be potential anticancer agents with low in vivo toxicity, low side effects and perhaps new modes of action and cellular targets compared with the classical metallodrugs. For instance, Azizollah and co-workers have studied the anticancer activity of two Zn(II)-based coordination complexes which scan be nominated as good anticancer agents against Caco-2 cell lines18; Mukherjee et al. have studied the anticancer activity or five mixed-ligand coordination polymers, and one of them demonstrates signiﬁcant cell death toward human colorectal carcinoma cells.19 In the research, 5,5'-((5-carboxy-1,3-phenyl- ene)bis(azanediyl))diisophthalic acid (H5L) with the -NH- joints, a semi-rigid carboxylic acid ligand was chose for its Lewis basic N donor positions and rich π-electron-rich aryl parts, which offers latent binding positions to capture the C2H2. A fresh porous MOF based on Zn(II) has been triumphantly acquired, and its chemical formula is {[Zn3(μ3-OH)(L)(H2O)3] ·3DEF·H2O}n (1), it was structurally investigated through powder X-ray diffraction (PXRD), the research of single crystal X-ray diffraction, infrared (IR) spectra, thermogravimetric analyses (TGA), as well as elemental analysis (EA). Owing to its Lewis basic -NH- joints and the π-electron-rich benzene rings on the skeleton, the activated complex 1 offers a favourable pore environment for binding C2H2 in preference to CO2 and CH4. At the environmental conditions, the adsorption capacity of C2H2 is up to 92.2 cm3 (STP) g-1, while the ideal adsorbed solution theory (IAST)-predicted adsorption selectivity for the equivalent molar of C2H2‐CO2 and C2H2‐CH4 binary mixtures is as high as 4.5 and 30.6, respectively. The serial biological investigations were implemented to assess the compound’s biological activity against liver cancer therapy combined with the LL-37. The molecular docking simulation is performed in addition to the experimental results for better understanding the origin of the possible anti-cancer activities of the proposed Zn complex.

Chemicals and Measurements. All the reagents and solvents employed for the generation of the complex could be obtained from the market, and these could be exploited without processing. The FTIR spectra could be performed utilizing KBr pellets (5 mg sample in the KBr of 500 mg) with the infrared spectra region form 400 to 4000 cm-1. Through employing Perkin-Elmer 240C analyzer (USA), we analyzed the Hydrogen, Nitrogen and Carbon elements. For the data of the PXRD, it could be recorded with Cu Kα radiation via employing the X-ray diﬀractometer of Bruker D8 ADVANCE (with l of 1.5418 Å, Germany), where X-ray tube was utilized at 40 mA and 40 kV. The TGA was implemented in the atmosphere of nitrogen at 5 ℃·min-1 heating rate exploiting the equipment of Seiko Extar 6000TG/DTA (Japan). For the as-generated samples, they can be characterized via utilizing TGA in the atmosphere of nitrogen at 10 K min-1 heating rate exploiting the Perkin-Elmer Pyris 1 TGA thermogravimetric analyzer (USA) reached 873 K. Finally, the gas adsorption of C2H2, N2, CH4, and CO2 were measured through the instrument of Micro- meritics ASAP 2020 (American Micromeritics Corporation, USA).
Preparation and Characterization for {[Zn3(μ3-OH)(L) (H2O)3]·3DEF·H2O}n (1). 0.05 mmol and 24.1 mg of H5L and 29.7 mg and 0.1 mmol of Zn(NO3)2·6H2O were dissolved into the solvent mixture generated from 1 mL H2O (1 mL) and diethylformamide (4 mL, DEF) (with 1:2 volum ratio). The product was autoclaved for seventy-two hours at 100 ℃, and after that, it was naturally cooled to the environmental temperature in order to acquire the rectangular massive colorless crystals with 51 percent yield (on the basis of the Zn(ii)). Elemental analysis (%), calcd for the C38H53N5O18Zn3: N, 6.58; C, 42.90 and H, 5.02. Found: N, 6.42%; C, 42.63% and H, 5.11%. IR (KBr, cm-1): 586.1 (w), 627.9 (s), 655.8 (m), 695.2 (s), 743 (s), 779.9 (s), 809.3 (m), 851.2 (m), 872.1 (m), 969.8 (m), 1015.1 (s), 1060.5 (s), 1098.8 (s), 1123.3 (m), 1158.1 (s), 1193 (s), 1301.2 (s), 1364 (s), 1395.3 (m), 1426.7 (s), 1486 (s), 1566.3 (s), 1625.6 (s), 1653.5 (s), 2930.2 (w), 3436 (br).
The data for X-ray can be analyzed through Oxford Xcalibur E diffractometer. For the strength data, it was analyzed via exploiting the CrysAlisPro, and this data was then converted to HKL files. And the original structural manners were established by the direct means based SHELXS, and after that, least-squares method based SHELXL-2014 was exploited to modify. The anisotropic parameters were mixed with global non-hydrogen atoms. Next, the entire hydrogen atoms were geometrically fixed via applying the AFIX commands to carbon atoms that they adjacent to. The compound’s details of optimization and its parameters of crystallography were revealed in length in the Table 1.
Cell Counting Kit-8 kit (CCK-8). The CCK-8 detection kit was completed in the experiment for the assessment of the complex’s inhibitory activity against the viability of the HepG2 liver cancer cells. This research was accomplished fully in the light of instructions with a little modification. Briefly, in the stage of logical growth phage, the HepG2 liver cancer cells could be harvested and then these cells were inoculated into the plates of 96 well at 105 cells each well ultimate destiny. After incubation for twelve hours in the incubator at 5% CO2 and 37 ℃, the treatment was completed after adding the compound into wells with 1-80 mM concentration. Subsequently, discarding the culture medium of cell and adding the fresh medium involving the reagent of CCK-8. At last, for each well, its absorbance was determined via using the microplate reader at 450 mm.
Trans-well Assay. For the sake of assessing the compound’s influence against the invasion ability and the migration ability of HepG2 liver cancer cells, the trans-well assay was carried out in our work. This implementation was conducted total based on the protocols with minor change. In short, in the case of Matrigel matrix and no Matrigel matrix, the 24-well trans-well chambers was pre-coated. Then, the chambers were placed into the 24-well plates. Next, in the stage of logical growth phage, the HepG2 liver cancer cells could be harvested and then these cells were cultured into upper chamber in the medium without FBS at 5×104 cells each well destiny. After the incubation of cells in the incubator at 5 percent CO2 and 37 ℃ temperature, after twenty-four hours, the remaining cells in upper parts of membranes were wiped off carefully, and the cells in lower part of membranes were labeled with crystal violet (0.5%). Under the microscope and in 6 randomly separated fields, the numbers of cells on the lower membrane surface was quantified. This conduction was carried out at least 3 times.
Simulation Details. The grid parameter file for the molecular docking simulation that contains the binding area and the Zn complex is prepared by AutoDockTools ver. 1.5.6., the binding area that contains multiple residues where the active binding sites are determined is from the protein 1WQ8 (PDB code), which is a member of the vascular endothelial growth factor-A (VEGF) protein family. The binding area coordinates are 19.606, 31.676, and 0.317 in three dimensions and the length of the cubic box is 80 angstrom. The docking parameter file for the molecular docking simulation has also been prepared by AutoDockTools, the Zn complex has 3 rotatable dihedrals and the maximum allowed binding poses are set to 50 for better sampling. All simulations are performed by AutoDock ver. 4.2. The post-analysis and visualization are performed by PyMOL ver. 2.2. 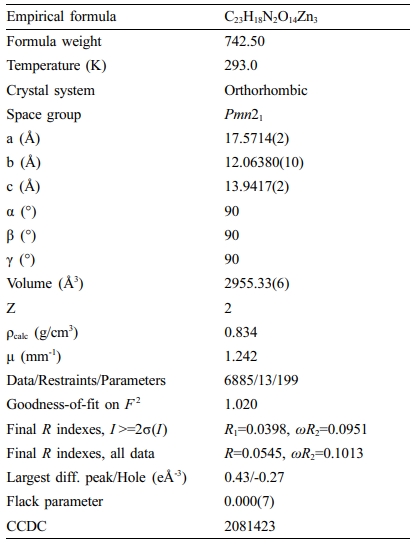 To sum up, we have created a fresh porous Zn-MOF with employment of 5,5'-((5-carboxy-1,3-phenylene)bis(azanediyl))- diisophthalic acid (H5L) with the -NH- joints, a semi-rigid carboxylic acid ligand. Owing to its Lewis basic -NH- joints and the π-electron-rich benzene rings on the skeleton, the activated complex 1 offers a favourable pore environment for binding C2H2 in preference to CO2 and CH4. At the environ- mental conditions, the adsorption capacity of C2H2 is up to 92.2 cm3 (STP) g-1, while the IAST-predicted adsorption selectivity for the equivalent molar of C2H2‐CO2 and C2H2‐CH4 binary mixtures is as high as 4.5 and 30.6, respectively. The CCK-8 kit outcomes indicated that this compound could distinctly decline the liver cancer cells viability. Furthermore, the invasion ability and migration ability for the liver cancer cells was also decreased under the cancer cell exposure. Finally, it can be acquired that this compound was an outstanding candidate for the liver cancer treatment through inhibiting the viability, invasion ability and migration ability of the cancer cells. The performed molecular docking simulation showed that multiple hydrogen bonds were formed between the proposed Zn complex and the VEGF protein, the binding lengths are between 1.6 and 2.7 angstrom. Such results indicate that the Zn complex has good anti-cancer activities and shows good potential for cancer treatment.