Naphthalonitrile substituted with triethylene glycol (TEG) in the presence of transition metals synthesized a series of metallo-naphthalocyanine derivatives (MNPcs), and it was investigated that the optical and near-infrared (NIR) absorption properties. In UV-Vis spectra measurements, these MNPcs exhibited strong absorption in the NIR regions because of the annulated benzene ring of naphthalocyanine and highly electron-donating substituents attached at the non-peripheral positions. The absorption wavelength of MNPcs was effectively adjusted in NIR ranges from 780 to 950 nm by inserting various central metals. Additionally, the presence of TEG-substituents in MNPcs significantly enhanced the solubility in highly polar solvents and the compatibility with the polymer matrix. NIR blocking films were fabricated for taking advantage of high NIR absorption and visible transmittance. When NIR film was fabricated with nickel-napthalocyanine, it was confirmed that the NIR cutting property can be improved while maintaining the visible light transmittance compared to the antimony tin oxide (ATO). From the observations, the feasibility of designed MNPcs as an effective NIR blocking material was evidenced, which is attributed to its strong NIR absorption and compatibility in the polar mediums.

A series of metallo-naphthalocyanines (MNPcs) were synthesized, and the optical and near-infrared (NIR) absorption properties were investigated. The absorption wavelength of MNPcs was effectively adjusted in NIR ranges from 780 to 950 nm by inserting various central metals. High NIR absorption and visible transmittance were taken advantage of for NIR blocking films. 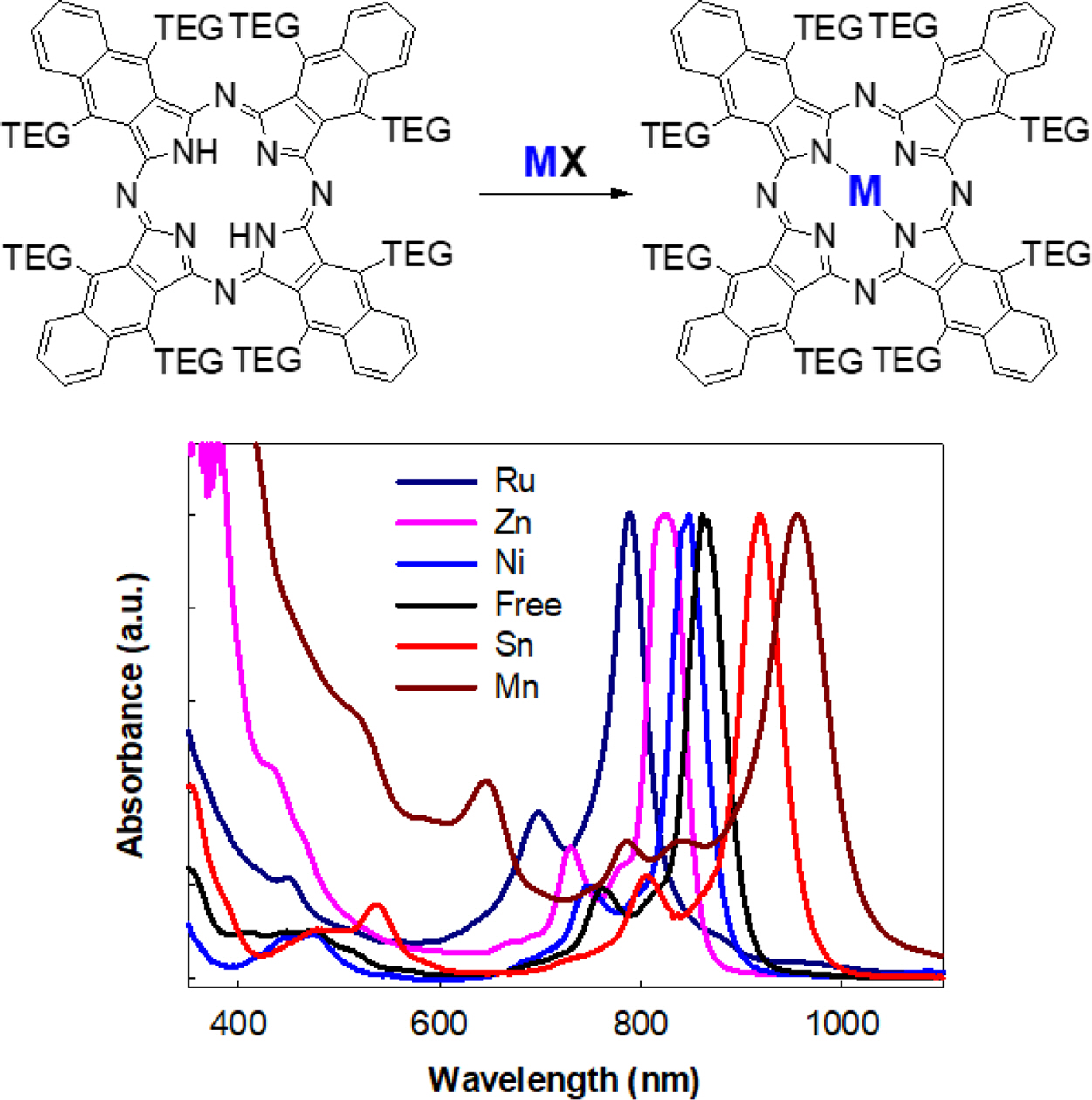 This work was supported by the Technology Innovation Program (20011133 and 20010034) funded by the Ministry of Trade, Industry, and Energy (MOTIE, Korea).

Excessive solar heat consumes extra energy to maintain internal temperatures and adversely affects environmental issues. Near-infrared (NIR) rays, ranging from 700 to 3000 nm, constitute ~52% of the total solar energy.1 The majority of the solar power is located in the radiation between 700 and 1200 nm. The NIR rays have been known for increasing the internal temperature.2 More energy consumption tends to be used in maintaining a constant internal temperature of the buildings. Thus, NIR barriers have been developed to prevent NIR rays from entering the buildings. Active research is still going with various metal oxides as NIR blocking materials.3-5 Antimony tin oxide is inexpensive among metal oxides, and has a trasmittance of over 70% in the visible light region, and has been used as heat-shielding material for NIR blocking.6-8 But, ATO has the disadvantage of having a relatively low cut-off in the NIR region between 700 and 1000 nm.9 The combination with organic dyes was found helpful in improving the NIR blocking but often caused the large aggregates due to the reduced solubility.
Phthalocyanines (Pcs) are well-known macrocyclic pigments with good thermal and chemical stability.10 Pcs exhibited characteristic dual absorption spectra, showing a Q-band in 600-700 nm and a B-band in 300-400 nm, with the coverage of green and blue colors.11 Meanwhile, naphthalocyanine (NPc) is a cyclotetramerized product of naphthalonitrile whose π-system is further expanded by fused benzene rings. The extended π-electrons of NPcs induce a significant red shift in Q-band absorption, compared to that of Pc.12 The substituents of the electron-rich groups at the non-peripheral positions destabilized the highest occupied molecular orbital (HOMO) state of Pc, resulting in the substantial red-shift of the Q-band to the NIR region.13,14 Similarly, it is expected that the non-peripheral functionalization of NPc facilitates the red-shift of the Q-band. Therefore, NPcs showing strong absorption at NIR regions can be a potential candidate in organic solar cells, photodynamic therapy, heat absorbers, and NIR imaging.14-17 However, NPcs suffered from severe aggregation due to low solubility.18 In order to improve the solubility of NPcs, the non-peripheral substitution can be extended with long-chain substituents, preferentially having non-polar nature.
This article presents the preparation and applications of hydrophilic NIR absorbing metallo-naphthalocyanines (MNPcs). Various central metals, including Ru, Zn, Ni, and Sn, have been incorporated in the central position to fine-tune the Q-band, thus delicately modifying the absorption in NIR ranges. As far as we know, no previous reports have been made concerning the systematic investigation of MNPcs. In order to improve the solubility in common solvents and compatibility with the polymer matrix, trimethylene glycol (TEG) groups were selected and introduced at non-peripheral positions (TEG-MNPc). The optical properties of the prepared TEG-MNPc were examined depending on the inserted metals. The electrochemical properties of MNPcs were investigated in terms of cyclic voltammetry (CV) measurements. The nickel-naphthalocyanines (NiNPc)-ATO hybrid mixture was prepared in the photocurable resin, and the NIR blocking efficiency was examined by measuring transmittance in the 380-2500 nm region. 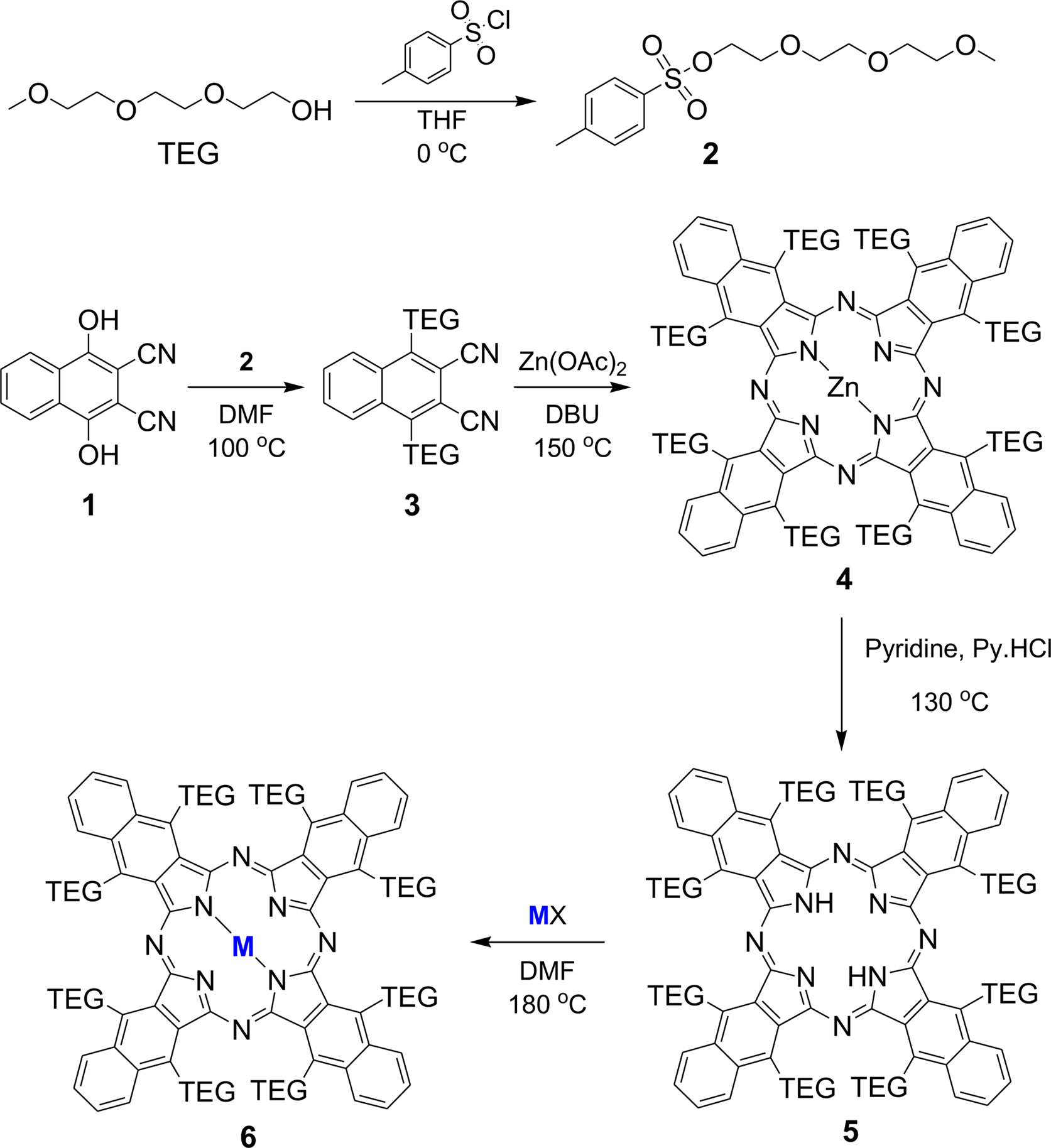 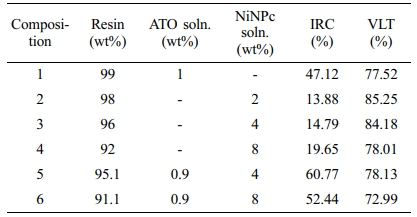 MNPcs substituted with TEG at the non-peripheral position showed a sharp Q-band absorption in the NIR and high transmittance in the visible regions. The absorption maxima can be finely tuned in the range of 780-920 nm depending on the central metal ion. Electrochemical studies revealed that the influence of the central metal ion on the HOMO and LUMO stabilization. NiNPc-ATO hybrid films were prepared by mixing NiNPc and ATO to utilize distinctive absorption ranges below and above, respectively, 1000 nm. The NIR blocking performance was improved by 3.65% while maintaining the identical visible transmittance. Current results demonstrate that MNPcs can be effectively employed as a NIR blocking material that is applied for useful applications, including solar glasses and NIR electronic shutters.