Adsorption of Fe(Ш), Co(II), Cu(II), Zn(II) and K(I) by strong acid resins, Dowex 50WX2 200-400 (H) and Amberlite IRP-69, was studied to investigate the adsorption behaviors and mechanism in single-metal and multi-metal systems. The results showed that 99.9% Fe(III) can be removed by Dowex 50WX2 200-400 (H) in 100 min ([Fe(Ш)] < 40 mg/L, resin amount = 50 mg, pH = 3.0, 60 ºC). Mechanism studies revealed that Langmuir model and pseudo-second-order kinetic equation illustrate better fit for the adsorption of Fe(Ш). Furthermore, the investigations on multi-metal adsorption indicated that resins display a similar adsorption ratio for the same-valence metal ions (Co(II) = Cu(II) = Zn(II)), and a more selective adsorption for high-valence metal ions than low-valence metal ions (Fe(III) > Co(II) > K(I)). The above results can be used for the treatment of wastewater and the recovery of metals from the spent catalysts. 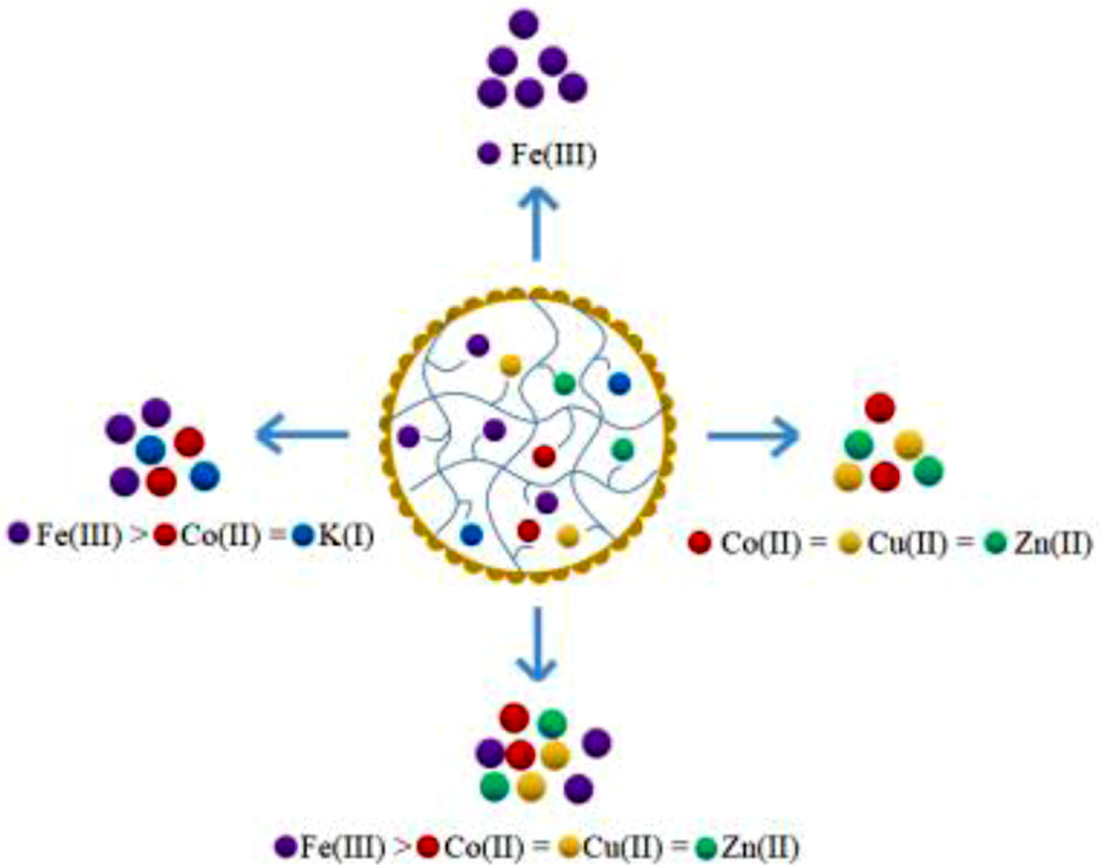 Financial support from the National Natural Science Foundation of China (No. 21176163; No. 21576174), Suzhou Industrial Park, the Priority Academic Program Development of Jiangsu Higher Education Institutions and the Program of Innovative Research Team of Soochow University are gratefully acknowledged.

In recent decades, metals have played an increasingly important role in chemical production and human life, especially transition metals, which have been widely used in catalysts,1 electroplating, batteries, etc.. However, the heavy metals2 (Fe, Co, Cu) in industry wastewater are harmful to ecological environment, and discharging them directly pollutes the water and soil, further endangers biological life and human health. In addition, discarding the rare metals and precious metals (Pt, Pd, Rh) in spent catalysts leads to the waste of resources.3 Therefore, separation and recovery of transition metals from these wastes is particularly significant for environmental protection and secondary use concern. At present, various techniques have been employed to separate metals from solution such as precipitation, solvent extraction, membrane filtration, and ion exchange.4 In the early research, precipitation was widely applied in separation of metals from aqueous solution. Meanwhile, it has been found to be in efficient.5 Solvent extraction is another common method used in metals recovery, which can improve the adsorption selectivity and efficiency. However, the use of organic solvents has caused secondary pollution to the environment.6 Membrane separation was also discovered as a viable way to separate metals.4 The implementation of this method can reduce the use of organic solvents, but the filter membrane is easily clogged. With the development of advanced technology in separation areas, ion exchange was presented with high metal selectivity and efficiency.7 It is generally employed in water treatment, metal separation, and catalysis.8,9 These resins used today are typically made of small beads of highly crosslinked polymers that contain functional groups which facilitate the ion exchange.10,11 Consequently, metals can be separated from the solution by ion exchange when their concentration is low. Moreover, ion exchange is environment friendly, and the resins can be reused for many times after the adsorption-desorption process.
Nowadays, many studies on ion exchanges have been devoted to the separation of metals. Molybdenum can be separated from chloride leach liquors in Nguyen’s survey which verified the possibility of Mo separation among Co and Al with AG1-x8 resin.12 Aboul-Magd found that Dowex HRWX2-Na exhibits great adsorption for Fe(III), Cu(II), and Zn(II) in the presence of acid or organic solute.13 Also, Duclos proposed to recover Pt from fuel cell catalysts by combining extraction, ion exchange, and precipitation, resulting in 76% Pt being recovered as solid (NH4)2PtCl6.14 Moreover, Sun published a literature about the recovery of Pt from chloride leaching solution in which 99.6% Pt was obtained after the elution step.15 In the above work, ion exchange has been shown to be an efficient method for separating metals, and the choice of resin is especially crucial.
Many factors affect the adsorption capacity of resins, the most significant is the functional group of which the resin contains.16,17 A variety of resins were examined for the removal of metals from various solutions. It was reported to have removed Cu(II) from aqueous solution by using Dowex HCR S/S and Dowex Marathon C, strong acid cation resins with functional group -SO3H, which resulted in a more than 98% Cu(II) removal efficiency under optimum conditions.18 The adsorption of Cu(II), Zn(II), Ni(II), Pb(II), and Cd(II) was surveyed using Amberlite IR-120 synthetic resin, whose functional group is also -SO3H.19 These bivalent metals could be removed completely from aqueous solution but the marked selectivity of an individual ion by this resin was not shown. Diphonix, a chelating resin, was used for Fe(Ш) removal from cobalt sulfate solution. Fe(Ш) was able to be separated efficiently from the Fe(Ш)-Co(II) acid solution when the acidity was controlled at pH = 1.20 A number of papers reported metal recovery from solutions by different types of resins. As shown in Table 1.
Pertinent data was obtained from Table 1, and it revealed that strong acid cation resins with -SO3H group have a superior affinity for metal cations, which provides a basis for the choice of resins in our research. Amberlite IR-120 resin also showed similar adsorption capacity with metals of the same valence but is not studied further. Also, most of the methods previously mentioned require several adsorption and multiple cycle steps. Therefore, the easily operable and efficient resins are needed to investigate the separation of these metals.
Two strong acid cation resins, Dowex 50WX2 200-400 (H) and Amberlite IRP-69, were typically chosen as for this report. These two resins are easily obtained for laboratory and industry use and are selected because of their low price. This research aims to test an efficient resin to separate Fe(III) from aqueous solution in sing-metal system and study the adsorption behaviors and rules of the resins for Co(II), Cu(II) and Zn(II) ions in multi-metal system. The research investigated the effect of contact time, pH, temperature, metal concentration, and resin dosage for effective metal removal, and studied the influencing factors of the selective adsorption for multiple ions. Furthermore, adsorption isotherm models and kinetics were investigated. 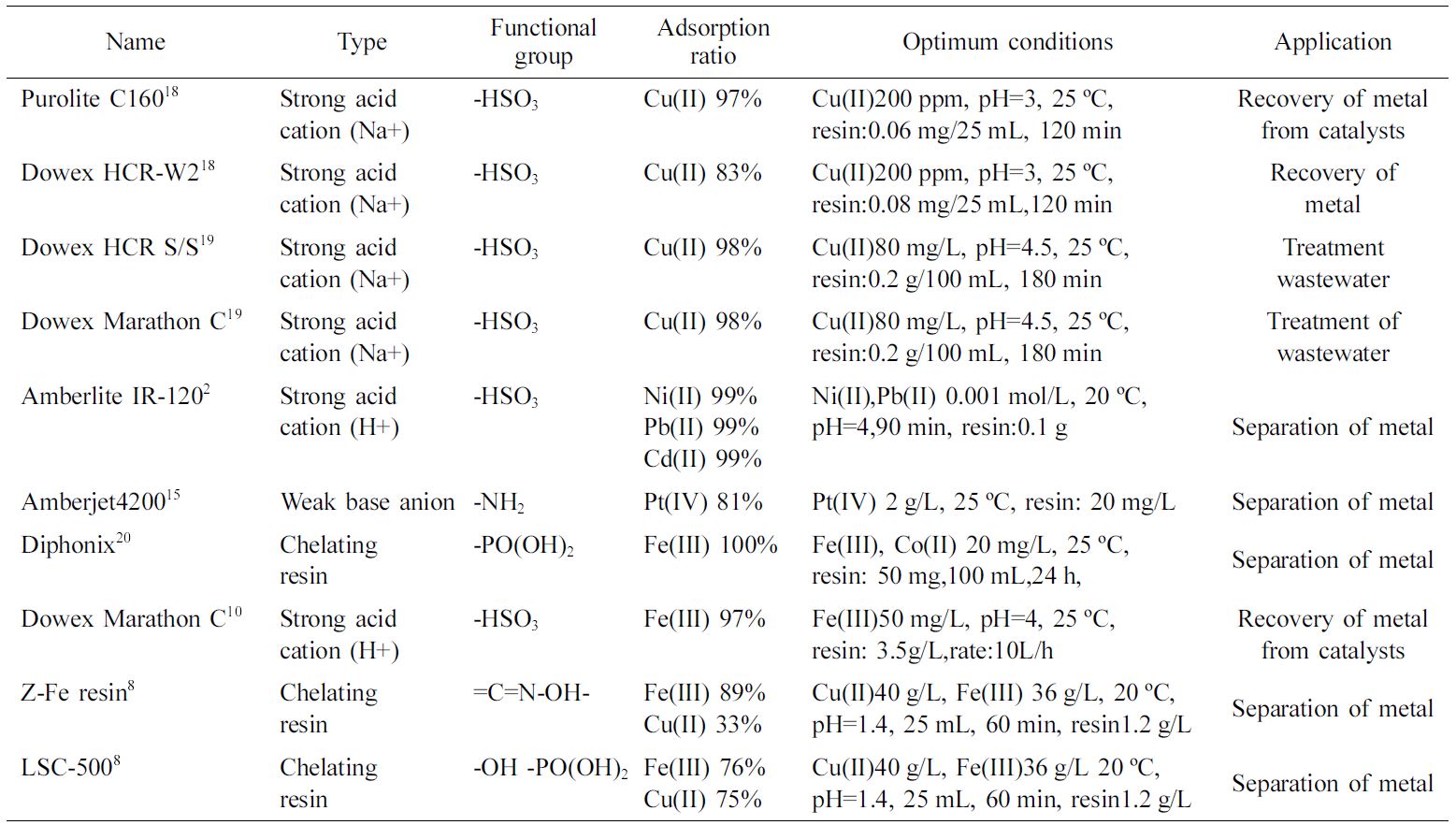 Materials and Instruments. All reagents were of analytical grade and all solutions were prepared in deionized water. The Amberlite IRP-69 and Dowex 50WX2 200-400 (H) resins were purchased from Suzhou Ketong Biological Pharmaceutical Technology Co. Ltd and Shanghai J&K Chemical Ltd. The properties of Amberlite IRP-69 and Dowex 50WX2 200-400 (H) are showed in Table 2. Sulfuric acid and sodium hydroxide were purchased from Chinasun Specialty Products Co. Other chemicals, Fe2(SO4)3 (M=399.88 g/mol), CoSO4· 7H2O (M=281.10 g/mol), CuSO4·5H2O (M=249.69 g/mol), ZnSO4·7H2O (M=287.56 g/mol), and KCl (M=74.5 g/mol) were purchased from Suzhou Industrial Park Instrument Co. Ltd.
The pH of the aqueous solution was controlled by sulfuric acid (30 g/L) and sodium hydroxide (30 g/L) and was tested by pH meter. The metal concentration was measured by direct coupled plasma atomic emission spectrometer (ICP-OES, 710-ES, Varian). The resins were dried in a vacuum drying oven at 30 ℃.
Preparation of Resins. Firstly, the resins need to be treated before the adsorption experiments. 2.0 g resin was washed twice with 20 mL sulfuric acid (30 g/L) to remove the possible metal complex residuals, then washed again with deionized water to adjust the resins back to be neutral. The resins were filtered and put in the vacuum drying oven at 30 ℃ until the weight was constant. The treated resins were then ready for the experiments.
Single-metal Adsorption. In a single-metal system, 10 mg/L synthetic solution of Fe(III) was prepared with Fe2(SO4)3. 100 mL above synthetic solution and 20 mg Dowex 50WX2 200-400 (H) or Amberlite IRP-69 resin were added into a 150 mL conical flask with the magneton. The mixture was then stirred at 25 ℃ for 100 min in an oil bath (pH = 2). The 20 mL liquid after reaction was taken for concentration test. The resin was then filtered and dried.21
The adsorption ratio a% was calculated by the following equation: 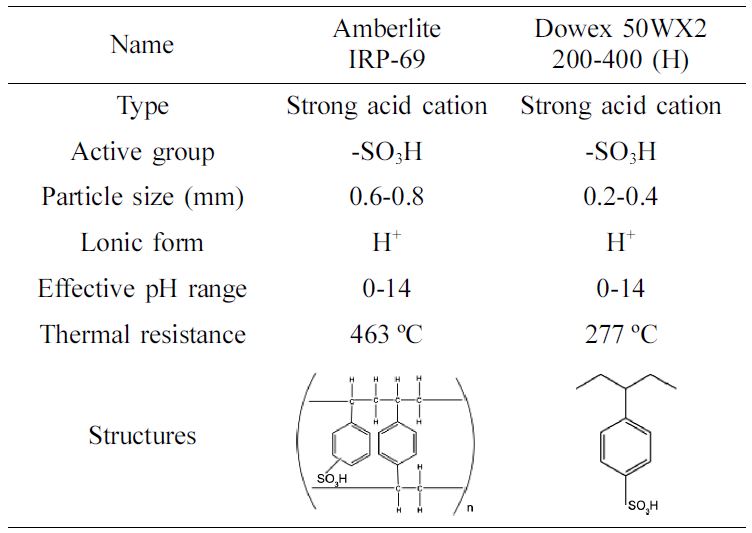 As shown in Figure 6, the Fe(III) is adsorbed by the functional group with H+ being released when going through the resin. The Langmuir and Freundlich isotherm models were introduced to understand the mechanism of Fe(III) adsorption by Dowex 50WX2 200-400 (H) and Amberlite IR-120. The adsorption capacity23 at equilibrium Qe (mg/g) was calculated as follows:

where V (mL) is the volume of the solution, m (mg) is the weight of the resin dried, and Ce (mg/L) is the equilibrium concentration.
The Langmuir model was described as eq. (4).

where b (L/mg) is Langmuir constant related to the affinity and Qm (mg/g) is maximal adsorption capacity.
The Freundlich model was described as eq. (5).

where n is Freundlich constant and K is Freundlich binding constant.
The adsorption data is shown with the model fit using the two isotherms with resins adsorption of Fe(III) in Figure 7(a , b). The model parameters were obtained by regression and indicated in Table 3. It was proven that Langmuir isotherm represents a better fit of Fe(III) adsorption than the Freundlich isotherm. Therefore, the Langmuir model was sufficient to describe the adsorption of Fe(III) within the range of the errors permitted.
The Langmuir adsorption isotherm indicates that the adsorption is monolayer and there is no other molecular coating, which is consistent with the experimental results of Fe(III) concentration effects on adsorption ratio. More ions cannot be adsorbed with the increasing of ion concentration because the active sites are completely occupied. It also demonstrates that the probability that an ion is absorbed at one site is independent of whether adjacent spaces have been occupied by other ions. Therefore, the Fe(III) adsorption ratio would increase with the increasing time until equilibrium state.
Adsorption Kinetics. The adsorption kinetic behavior of Fe(III) by Dowex 50WX2 200-400 (H) and Amberlite IRP-69 was described with the pseudo-first-order model and the pseudo-second-order model.24,25
The pseudo-first-order model was described as eq. (6):

The pseudo-second-order model was described as eq. (7):

Adsorption of Fe(III), Co(II), Cu(II), Zn(II), and K(I) was studied to investigate the adsorption behaviors and mechanism in single-metal and multi-metal systems. The influencing factors of contact time, temperature, pH, resin dosage, and metals concentration were investigated to enhance the adsorption ratio of resins. The results showed that Dowex 50WX2 200-400 (H) had a stronger affinity and higher selectivity for Fe(III). This occurred when the contact time was 100 min ([Fe(III)] < 40 mg/L, resin amount = 50 mg, pH = 3.0, 60 ℃), with the maximum adsorption ratio for Fe(III) being over 99.9%. Mechanism studies showed that Langmuir isotherms model and pseudo-second-order-kinetic equation fit well in the Fe(III) adsorption of single-metal system. Due to the simple operation, mild reaction conditions, and high selectivity of Dowex 50WX2 200-400 (H) and Amberlite IRP-69, the adsorption can be applied to the separation of Fe(III) from aqueous solution.
The results in multi-metal systems showed that Dowex 50WX2 200-400 (H) and the Amberlite IRP-69 resins reveal a weak affinity for the three metals and the similar adsorption ratios for the metal ions of the same valence state. It is proved that the resins demonstrate higher selectivity for metal ions of higher valence. The new findings and adsorption rules will benefit the treatment of industrial wastewater and recovery of metals from spent catalysts.